Imagine a motorcycle docile and robust enough to take the abuse of being your first bike, but with enough hidden performance to scare the crap out of a seasoned rider with a few simple mods.  Imagine that this same bike could navigate through car-laden city traffic and get you to class, go cow-trailing on the weekends, and even run the Barstow to Vegas if you dared.  Imagine this same motorcycle is incredibly easy to work on, but so dead reliable you hardly even get a chance to work on it.  I think we just explained why the Yamaha At1 was such an incredible motorcycle, and why it qualifies for this weeks, “Why We Love It.” 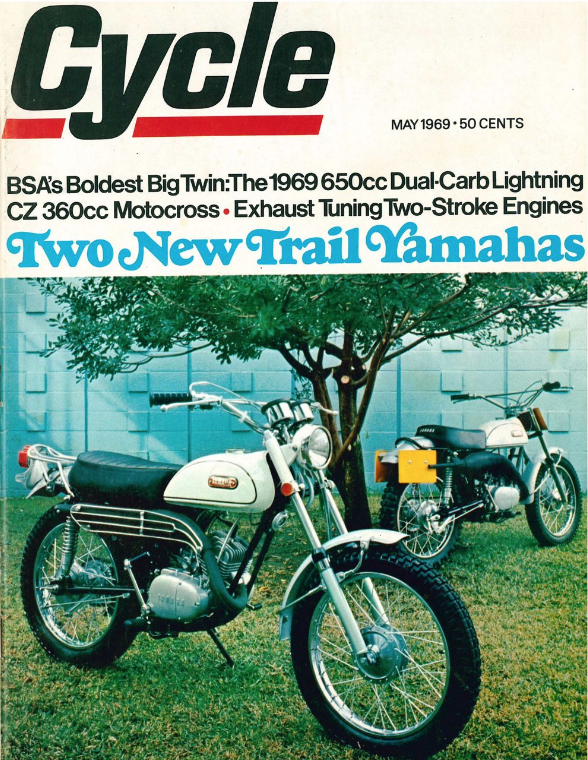 Hitting the salesroom floors in 1969, the pearlescent white Yamaha At1 was a scaled down version of the already wildly popular DT1 that came out the year prior.  This smaller, 11.5 horsepowered two-stroke single also featured Yamaha’s Autolube technology, so no mixing oil and gas was required.  Just top off each tank (oil and gas), and your little Yamaha would do the rest through a simple, yet extremely efficient oil injection system depositing the slippery stuff right into the crankcase.  Yamaha was determined to destroy the widely held opinion that two-stroke engines were noisy, messy, unreliable, and difficult to ride-the Yamaha Enduro series put this old way of thinking six feet under.

The rev happy little 125cc single had modern 12V electronics and even an electric starter, giving push button access to all of the fun.  Lighting was great, and there were optional turn signals for those who weren’t into hand signaling.   A duel-plug head provided a back up for any fouled plugs, and shaved down fins allowed the exhaust pipe to tuck in incredibly close, up and out of the way down the right hand side of the bike.  Carburetion was taken care of by, soon to be industry standard Mikuni.  A unit five-speed transmission put the 11 ponies to the ground and the beefy wet plate aluminum clutch hardly ever failed.  Even fifty years later, the design is nearly faultless. 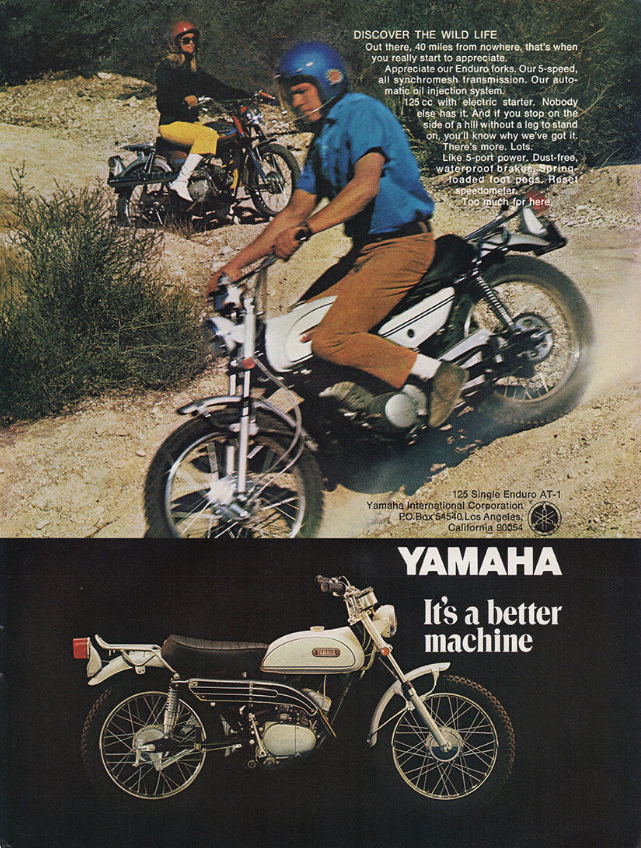 The styling of the AT1 may seem a bit pedestrian today, but at the time, it really was pioneering an entirely new look-a street legal dirt bike.  Scramblers had already been around for a decade or so, but Yamaha was the first manufacturer to truly build a motorcycle that could genuinely do both the dirt and the street equally well.  This wasn’t a scrambler, this was something different-It was an “Enduro.”   These bikes were able to find a life in both worlds, partially due to their incredibly light weight, and also their incredibly flexible chassis design.  For example, the rubber mounted fenders eliminated any cracked mounts while blasting down dirt roads and the seat had an extremely generous mouth of padding incase you forgot to raise your rear end off the saddle for that section of “woops” you didn’t see coming.  These exact same features also meant comfort and reliability on asphalt as well.

Dubbed the “Yamaha Enduros,” the AT1 was one of the best bikes in the family.  A 360cc RT1 headed the line up, then the DT1 (250cc), CT1 (175cc), AT1 (125cc), LT1 (100), and finally the little HT1 (90cc) was around for the littlest enduro fans.  Like most of the models, the At1 had eighteen inch trials pattern tires which made it nimble on the street, but without sacrificing too much grip in the dirt.  If you really wanted to see what the bike could do in the dirt, a spare 21 inch front wheel and some Yamaha GYT (Genuine Yamaha Tuning) parts could be swapped out in about an hour and make any of the Enduros into legit dirt bikes. 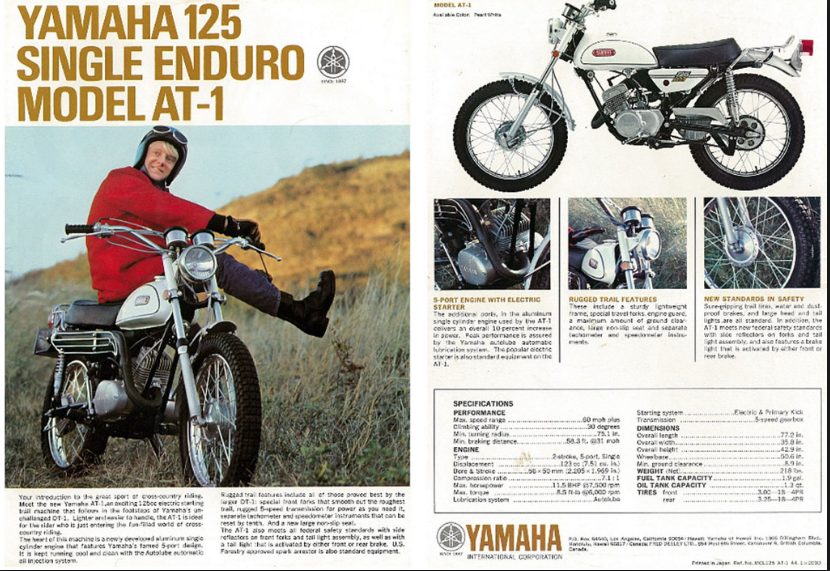 If you haven’t figured it out, I am a bit of an enduro nut and have been sucked into the AT1 world on a few occasions.  I have personally restored three of them, and always seem to have one around.  I’ve beat the crud out of a bone stock bike, restored a GYT-ed out MX version, and even built a sub-185lb Hindall framed vintage motocross hotrod.  They’re kind of addicting, and incredibly versatile.  Need proof?  What other bike can you ride legally on the street, race off road, race on road, and happen do all of those things brilliantly?  And finally, here’s the kicker-they’re cheap and parts are everywhere (and cheap too!).  Is there any wonder why we love this bike?

The Most Versatile Vintage Motorcycle There is?

A few years ago I stumbled across a completely original 1969 Yamaha AT1 on Craigslist for the measly sum of $400.  The bike was pretty clean, other than the basic needs of a bike parked and forgotten, it was pretty decent.  After a few evenings in the garage, I replaced the fork and crank seals, put on a new seat cover, new battery, timed the motor and had a beautifully running around towner.  As my confidence in the AT1 grew, so did the boundaries.  Soon, fire roads were just as good as paved roads, and those bmx jumps the neighborhood kids made turned into my own personal Even Knievel training grounds.  The AT1 took everything I threw at it and always started at the push of the button the next day. 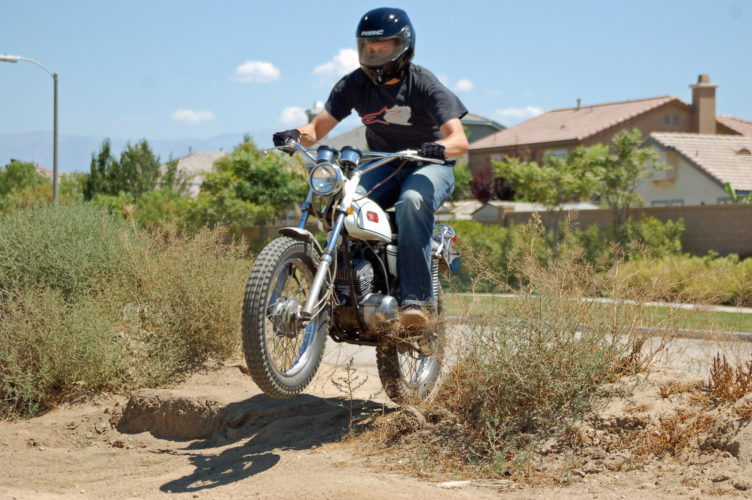 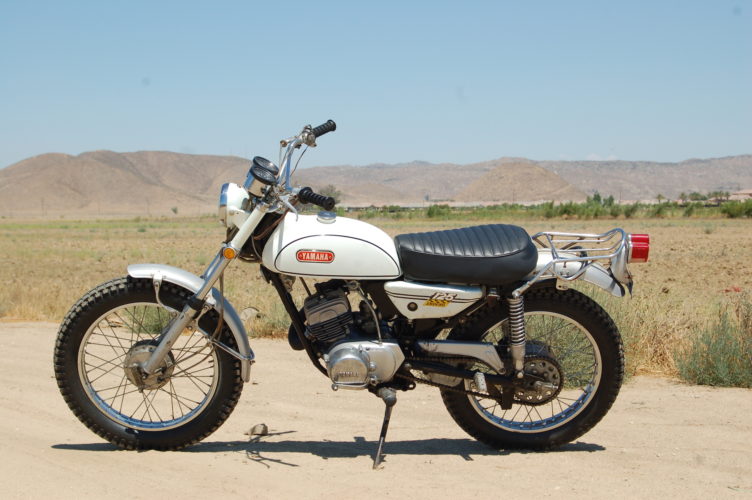 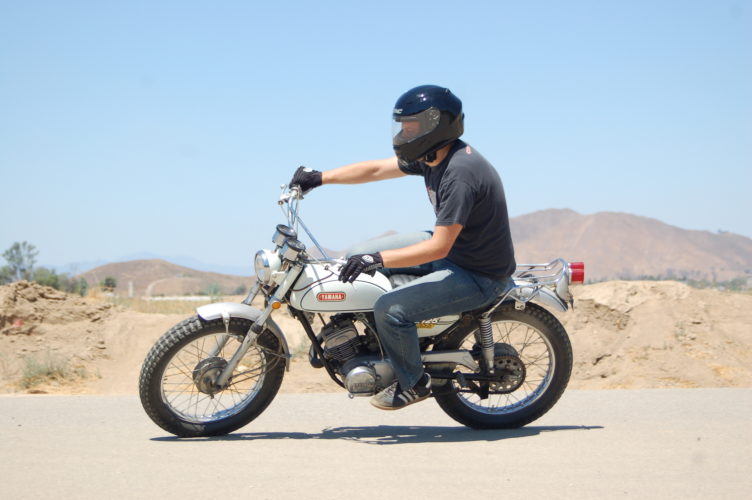 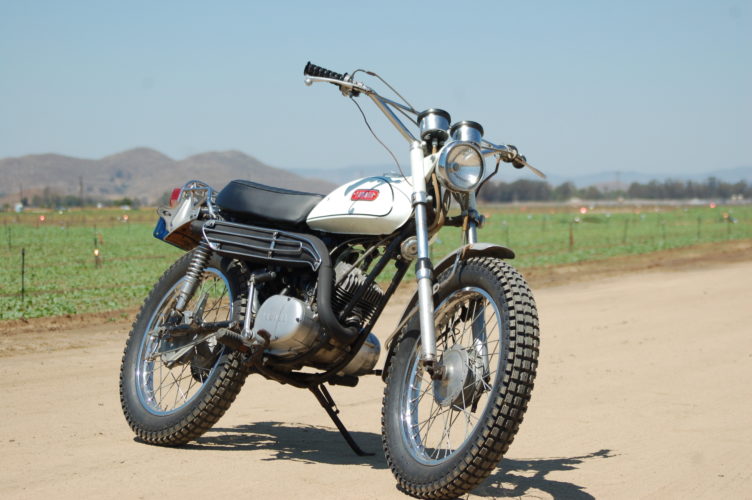 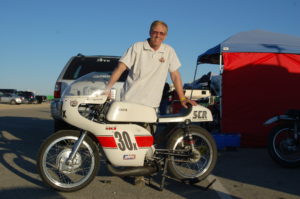 The October, 1970 issue of Popular Cycling featured an off the wall article called, “From Boonies to the Black Top,” in which Robert Schleicher delved into the world of road racers built out of off-roaders.  One of the most successful bikes being used at the time was our good friend, the Yamaha AT1.  Fast forward about 40 years and a two-stroke tuning wizard named Scott Clough used an AT1/CT1 powered road racer to such success in AHRMA 200GP road racing that he eventually quit racing and just worked on other peoples bikes-winning had become too easy.  Today, you will see a fair number of AT1/CT1 (These engines are nearly identical, main difference is the 125cc vs 175cc displacement) vintage road racers in a variety of frames racing across the US. 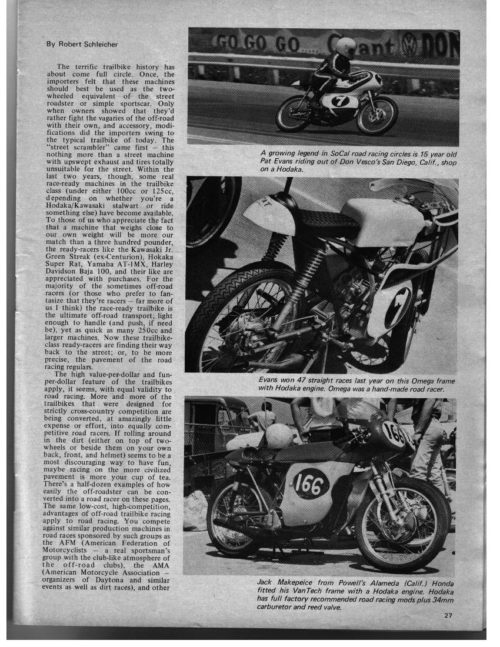 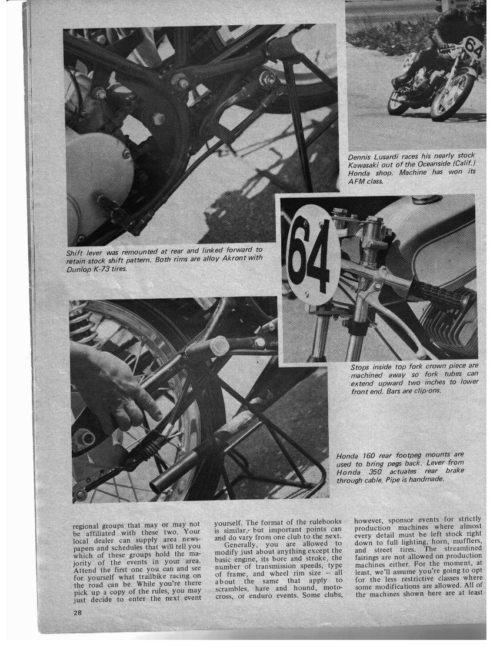 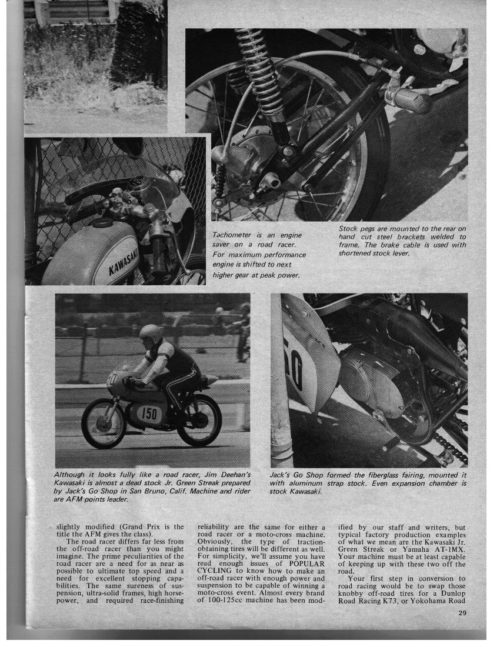 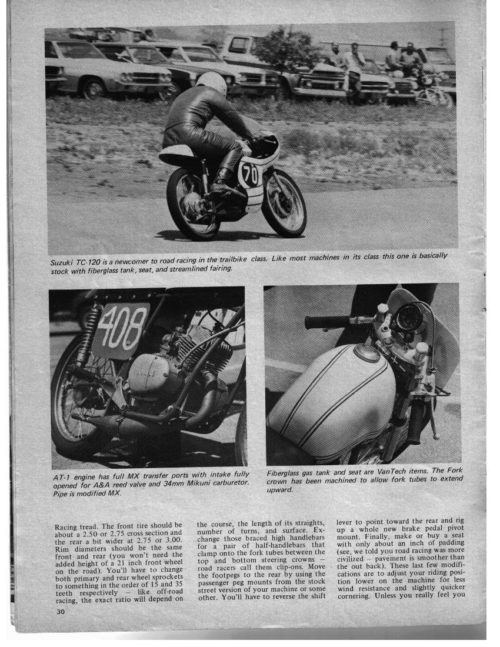 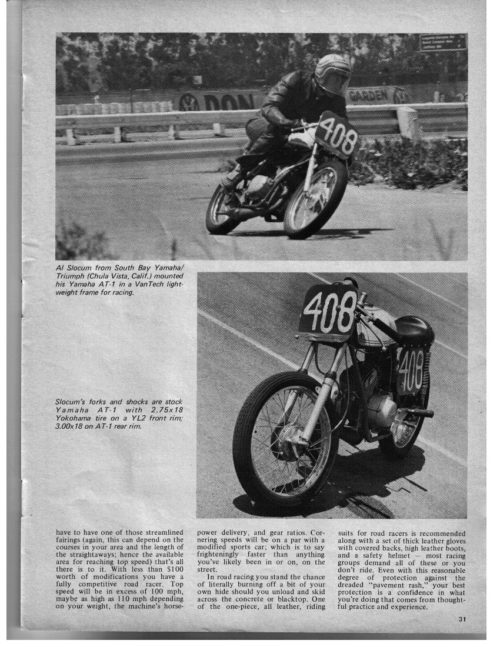 The Yamaha AT1’s age allows it to race in most 125 classic motocross classes.  Honestly, this seems a bit unfair, because when you have a GYT kitted, or better yet, a Scott Clough tuned AT1 making horsepower in the mid 20s line up next to a Bultaco, CZ, and a Harley Baja, there’s not much of a contest.  What makes the Yamaha AT1 that much more competitive is the incredibly huge aftermarket created around these bikes.  Yamaha themselves provided GYT high mounted fenders, expansion chambers, ported barrels, hi compression heads, and pancake air filters.  Companies like Webco, Torque Engineering, and ACK provided hundreds of ways to make your street derived Yamaha Enduro into a no-nonsense race machine.  Extreme enthusiasts could even select an entirely custom chassis to house their hopped up AT1 made by Van Tech, Redline, Hindall, or Trackmaster. 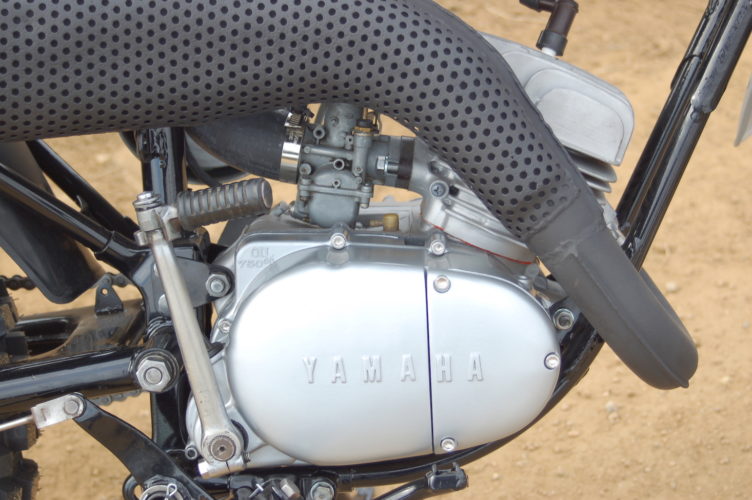 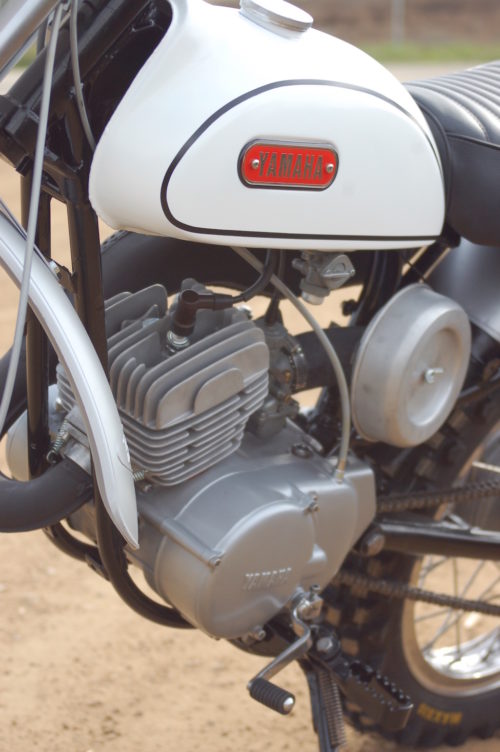 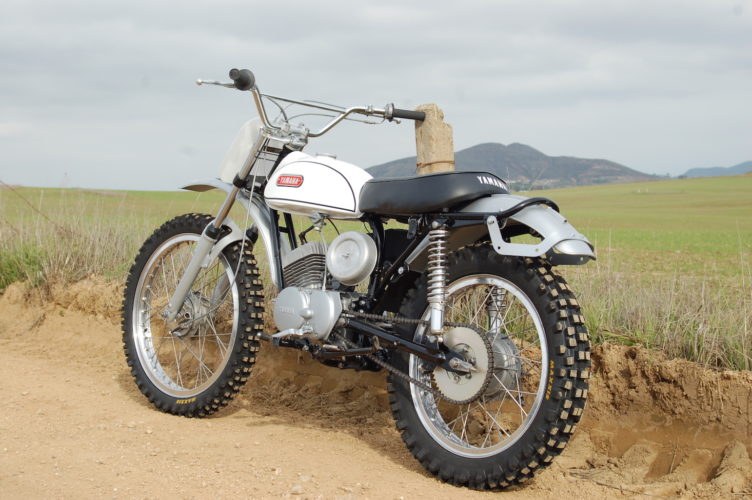 Photography By Gabriel and Seth Trench