Spending fake money is fun, not as fun as real money, but way, way less regret involved.  We thumbed through the catalog for the Autumn Stafford Sale presented by Bonhams on October 13-14, in Stafford, UK, and came up with the top five bikes we’d bid on.  Our fictitious auction participation is turning into a bit of a theme over here.   We hope you all can get into the spirit too, and post the top five bikes you’d bid on in the comments section below.  Without further adieu , here are five bikes we wouldn’t mind seeing when our garage door rolls up. 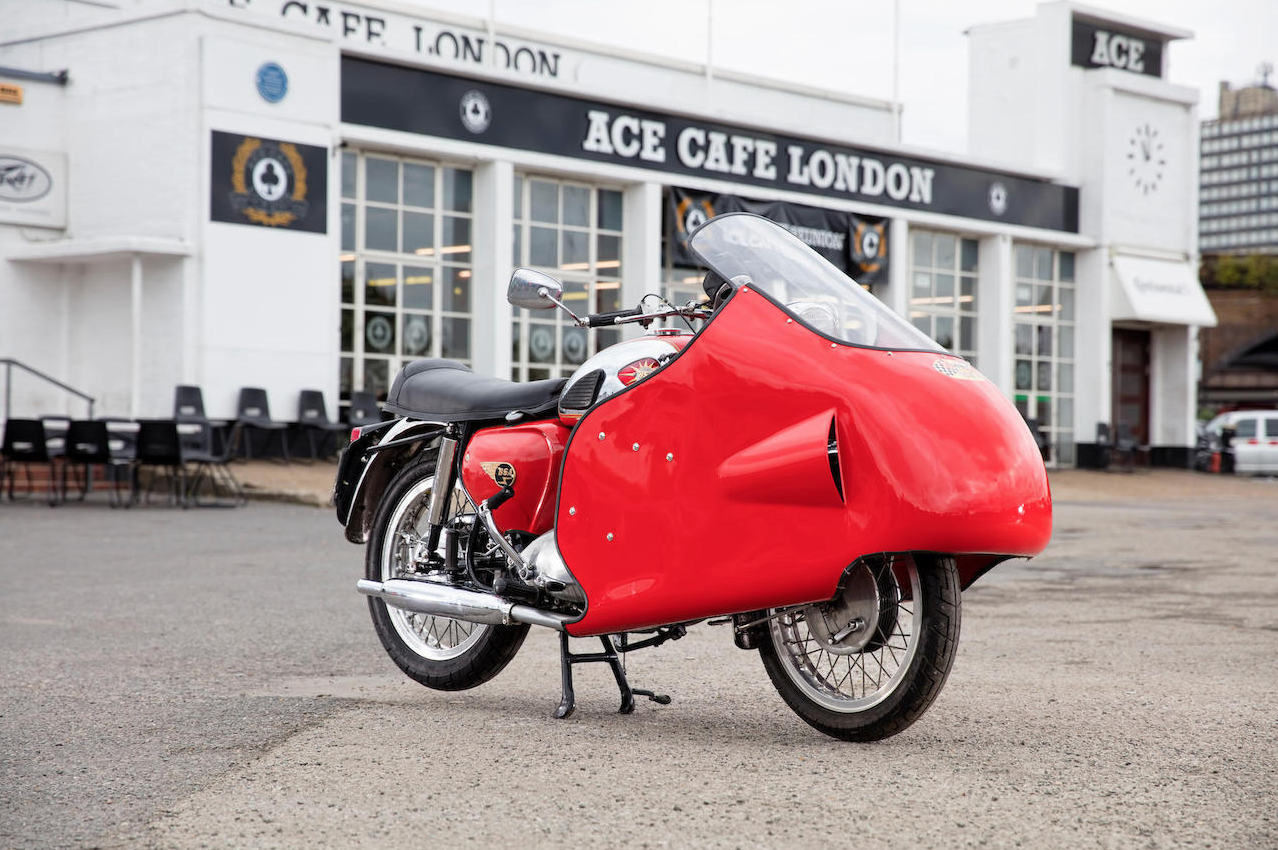 The BSA A65 Rocket is one of those bikes that never quite gets the attention it deserves.  BSA’s attempt at a unit construction, Triumph Bonneville killer, the A65 may not be as good of a bike as the Bonnie, but it’s still a great bike, and dripping in character.  Honestly, the full DMD “streamliner” fairing caught our eye at first, then we realized there was an A65 underneath.  But still, it’s a sharp bike that would get plenty of attention when you “accidentally” crash your local Cars and Coffee meet up.   The previous owner of this bike must have really been into period fairings, because this bike also comes with a matching red “dolphin” fairing.  Who doesn’t like options? 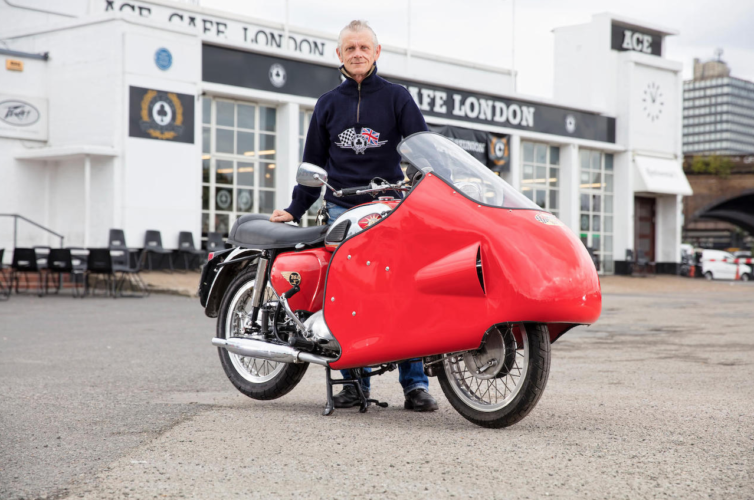 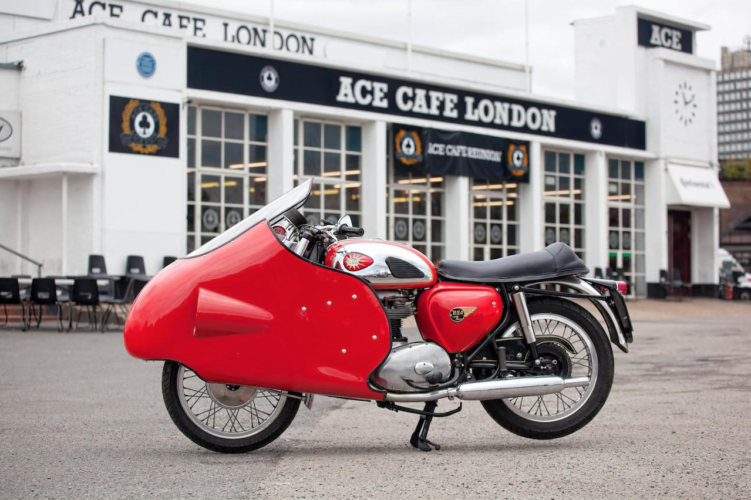 Okay, so this bike happens to be valued at over $100k.  But, if you cleared out your entire car/bike collection, your Roth IRA, 401k, and maxed a few credit cards, this could be a completely reasonable purchase.  Who wouldn’t cherish the opportunity to fire up their very own double-overhead cam, air-cooled, multi-cylindered MV Agusta  750S whenever they wanted?  Honestly.  How incredibly intoxicating would that noise be as it reverberated off of your very own garage walls?  This particular MV has been recently rebuilt (which must have cost a literal fortune) and even comes with a collection of brochures, literature, and an expansive list of spare parts.  The charcoal color on the tank is intriguing as well.  Sure it’s heavy, sure it’s insanely expensive to work on, sure a decently tuned CB750 could probably give it a run for it’s money-however, this is a legit, race-bred piece of motorcycling royalty.  With the looks, the sounds, the heritage, it really ticks all of the boxes.  If it this was the only bike at this auction, we’d still go. 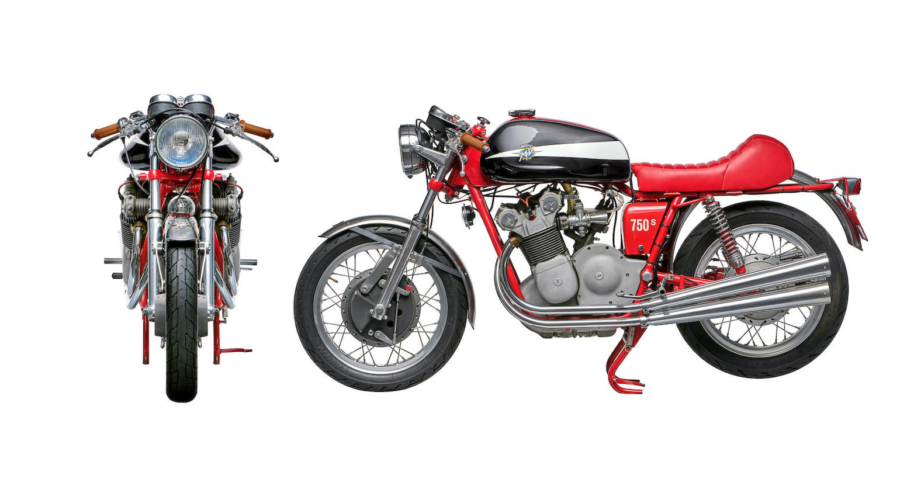 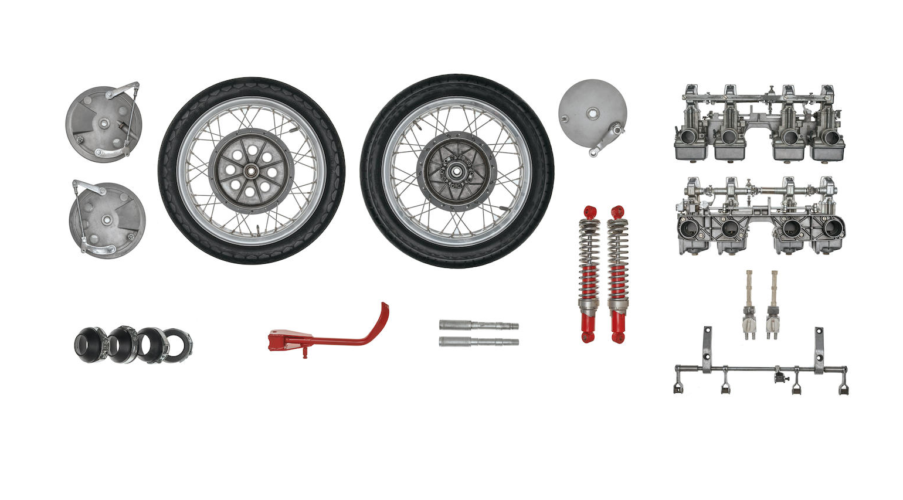 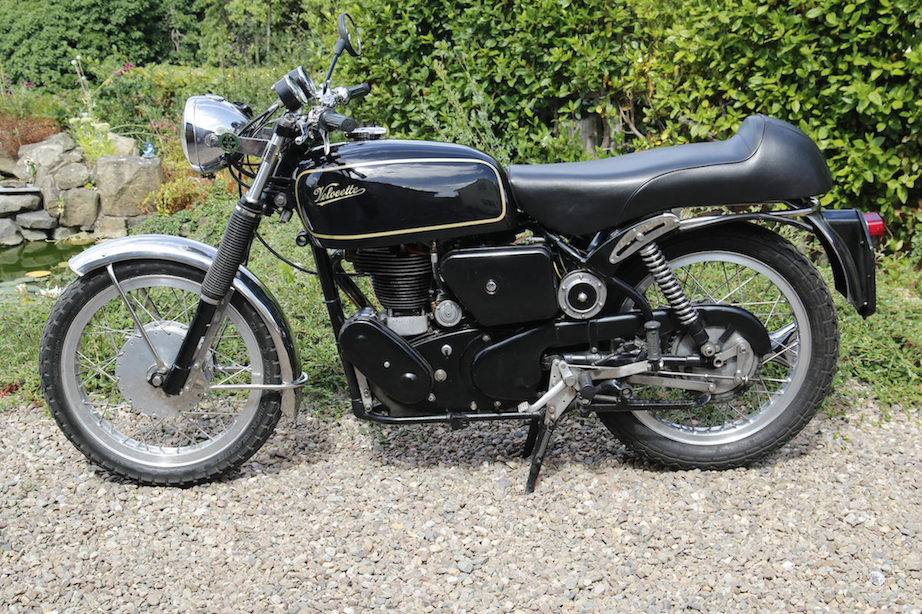 The Velocette Venom has always been one of our favorite British bikes.  Much like the BSA Gold Star, the Venom came right off of the assembly line as a gorgeous racer for the road and visually perfect.  There are a few features that may come across as big, clunky, and antiquated, but when you see one of these in person, it’s just pure and simple art.  The giant fish-tail exhaust, and unusually long racer-style seat fits nicely behind the huge, black tank, and the subtle hand painted gold pin striping bringing home the stately look of a sophistication on two wheels.  The twin-leading shoe front brake has a unique little scoop that just reinforces the racing nature of the bike.  Let’s not forget the 500cc single at the heart of this gentleman’s racer for the road.   Though larger valves and some cylinder head work really pushed this aging pushrod motor to its mechanical limits, there is something special about the Velocette design.   These Venoms some how have stayed a bit off of the radar and can be had at a decent price.  We’d definitely raise our paddle on this one. 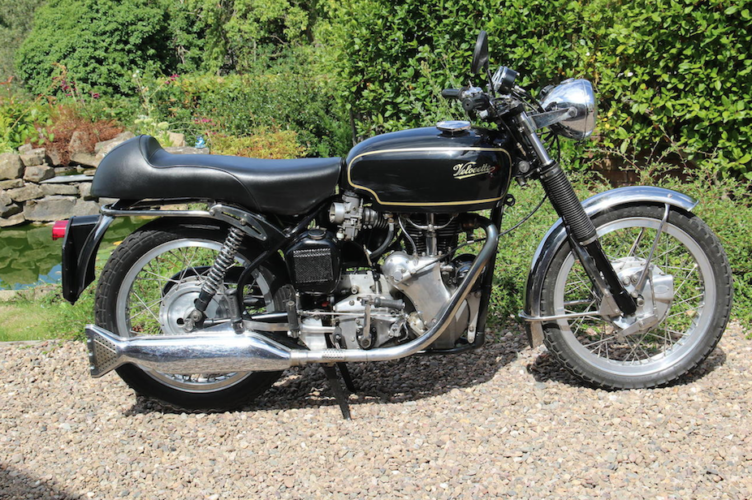 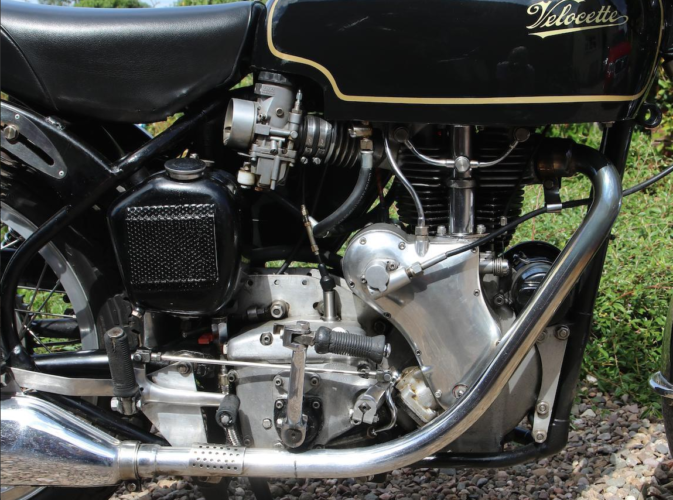 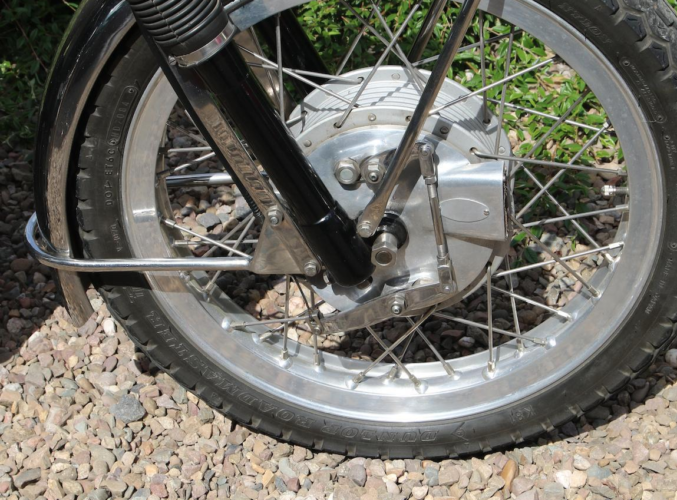 A cafe racer is a fickle thing.  Just like any bike, they can be done well, and they can be done very poorly.  Fortunately the phase of just tossing on a Benelli Mojave tank and a set of clubman bars seems to be behind us, and this Honda CB250 is a very nice build.  What we like about it is the mix of factory looking race bodywork with the stock components like the fenders, mufflers, and tail light.  Incredibly, it all works really well together.  The CB250 never did come to the US, but it’s big brother 350 did.  The bikes were a bit boring, but had incredibly reliable engines with plenty of hidden horsepower to be found.  This build definitely did away with any of the “boring” aspects of the seventies CB’s.  Though the riding position may not be ideal for daily use, this bike just looks fantastic and could easily be the highlight of anyones garage line up. 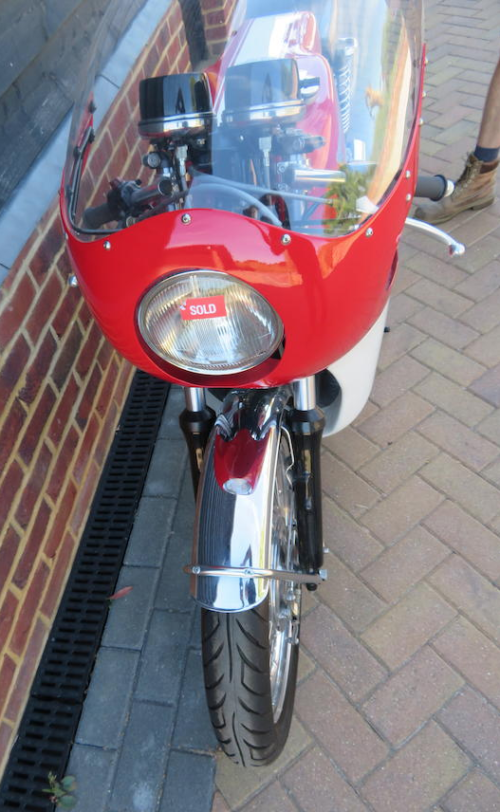 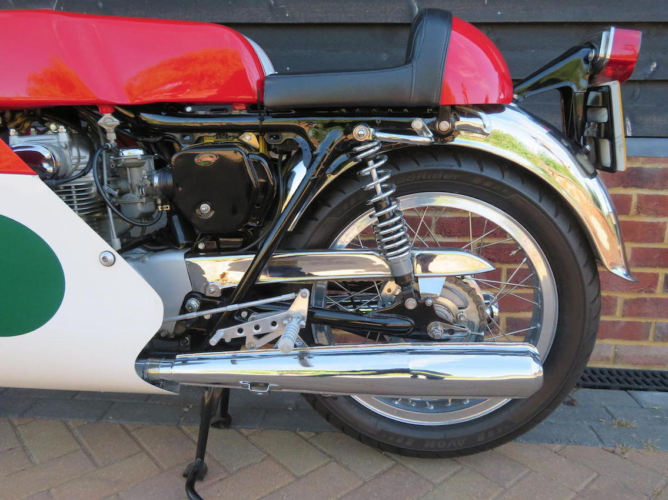 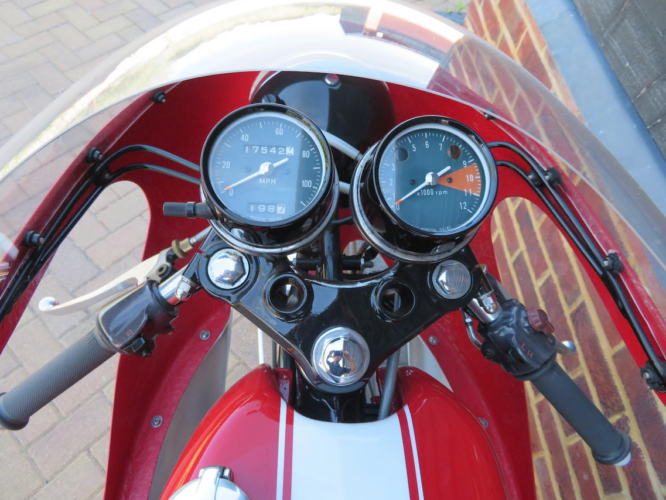 With a few competition only bikes in the auction, we’d have to take a crack at bidding on one of them-so it’d definitely be this genuine Manx Norton with actual TT history.  Not that a replica built Manx Norton isn’t amazing, this real-deal Manx has been raced all over of the UK throughout the 60’s, and frankly, that makes this bike a bit more special than a replica.  Built in 1961, this Manx has been updated to 1962 and beyond specs with a four-leading shoe front brake, six-speed transmission, Maxton shocks, and an enclosed valve-spring head.   History is one of the best things about vintage motorsports, and to own a motorcycle with such a storied past would be a definite thrill. 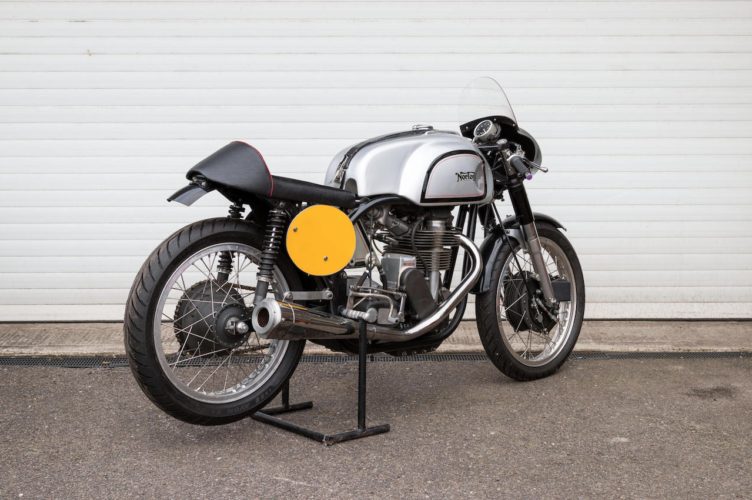 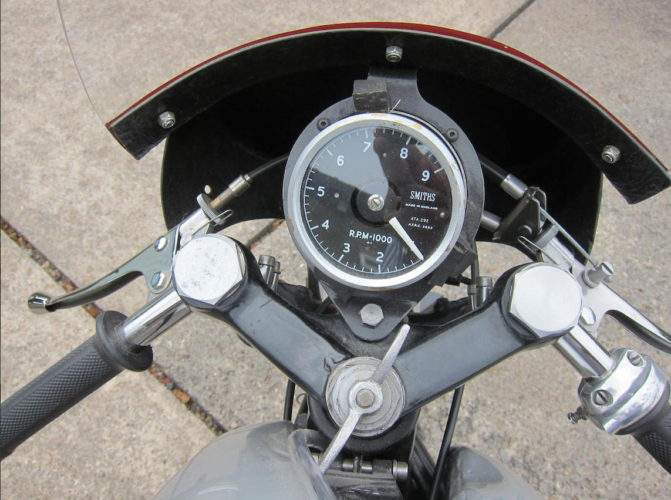 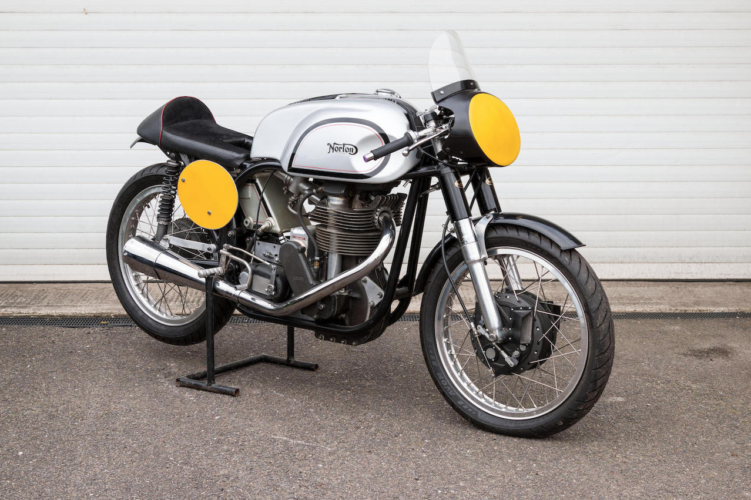 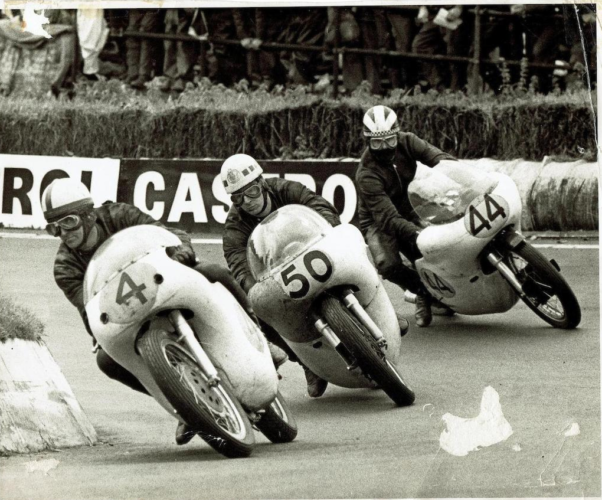 Well, that’ it…our top five.  What would you bid on?  Write a comment below!

All Photos above Courtesy of Bonhams.  See the entire catalog here.