Triumph Motorcycles are excited to announce their return to the historic Baja 1000 desert endurance race with the all-new Scrambler 1200 XE, piloted by stuntman and experienced  off-road and desert racer Ernie Vigil. 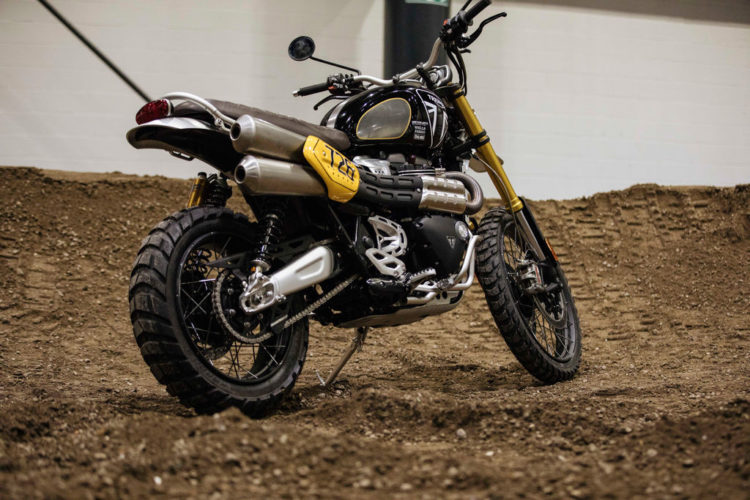 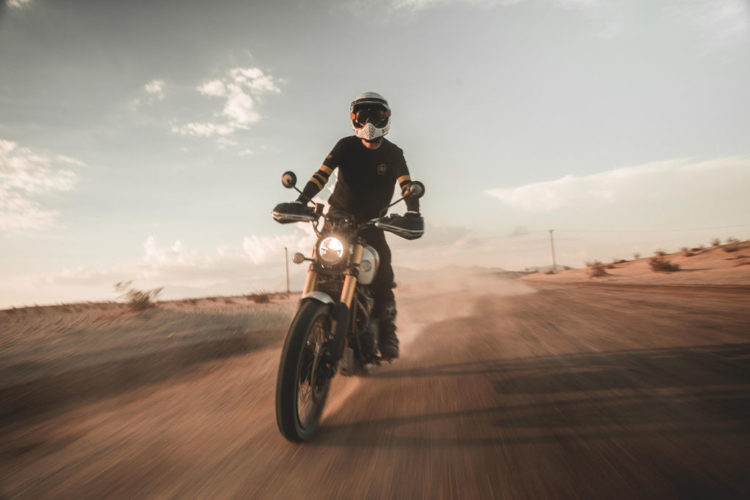 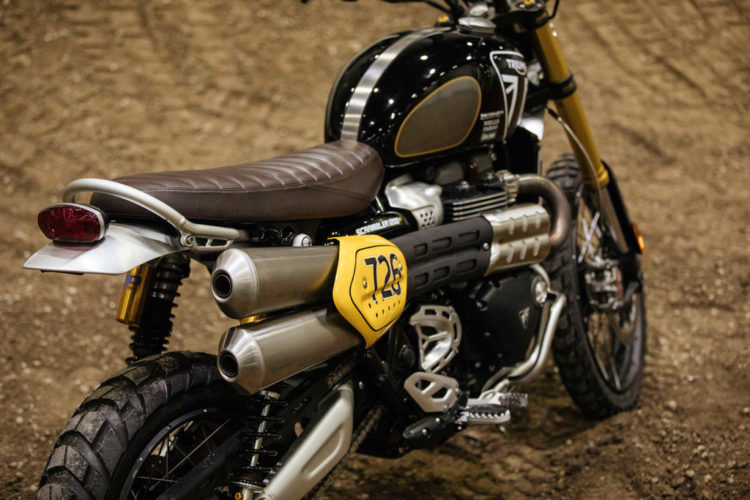 Originating in early 60’s and evolving significantly over time, the gruelling Score International Baja 1000 Rally is held on the California / Mexico peninsula and is considered to be the ultimate non-stop desert race in the World. The Baja 1000 allows various types of vehicles to compete on the same course with classes for; cars, trucks, ATVs, buggies and of course motorcycles. The Baja 1000 forms part of the World Championship of desert racing. Over the years, the race has attracted many celebrity participants including Steve McQueen, James Garner and Paul Newman.

Riding an almost-standard specification all-new Triumph Scrambler 1200 XE, designed to be the absolute pinnacle in modern Scrambler capability and the first of a new generation, Ernie will continue Triumph’s peerless bloodline of racing scramblers that can trace their roots back to the very beginning of the scene.

Triumph played a pivotal role at the beginning of the scrambler scene in the 1960s with the leading performance bikes of the day taken desert scrambling, with stripped back bodywork and pipes, inspiring the very first dedicated production scramblers, with the 1963 Bonneville T120TT, Bonneville 120c and TR6c and SC. These were the ‘real’ desert sleds, fuelling the scrambler scene, these were the bikes that Steve McQueen took to the desert and rode in the ISDT, these were the bikes that Bud Ekins raced and won on in the dirt and that raced in the legendary Big Bear and Baja 1000. The new generation 1200 XE takes this historic bloodline to the next level.

These benchmark setting motorcycles represent a first for dual-purpose capability and modern custom style. with a new level of category dominating capability. Having completed a rigorous testing regime prior to launch, the Triumph Scrambler 1200 XE is ready to take on the Baja 1000 with a few selected adaptions designed to take on this extreme racing challenge.

Supported by a passionate cross functional team of enthusiasts from within Triumph pulling together to make the race build happen so early in the lifecycle of the vehicle, Ernie Vigil is our chosen rider for the motorcycle.  Ernie is a highly capable off-road rider, who is a stunt rider as well as racer and a fan of Triumph Motorcycles.

Ernie is a veteran of the Baja 1000 course, having ridden it previously during the Mexican 1000 on a Triumph Tiger 800, and is looking forward to taking part in the open motorcycle class on the new Triumph Scrambler 1200 XE.

Ernie said; “I am so excited to get the chance to not only take on the Baja 1000, but also to be the first racer to take Triumph’s next generation Scrambler back to desert racing where it all began.”

Triumph Motorcycles are extremely grateful to our partners to making this specific race entry a reality. Wells Fargo who provide motorcycle financial services to Triumph dealerships in the USA have generously become our title sponsor for this race entry. Ohlins and Metzeler have both provided equipment for the race and have been crucial partners in the development of the original motorcycle.

Triumph Motorcycles wishes Ernie and the Triumph Scrambler 1200 a huge success in competing in and safely finishing the 2018 Baja 1000. 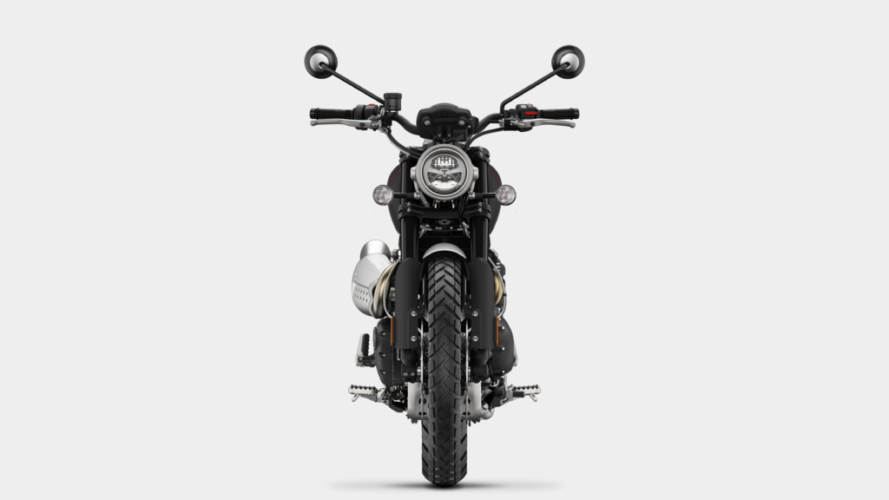 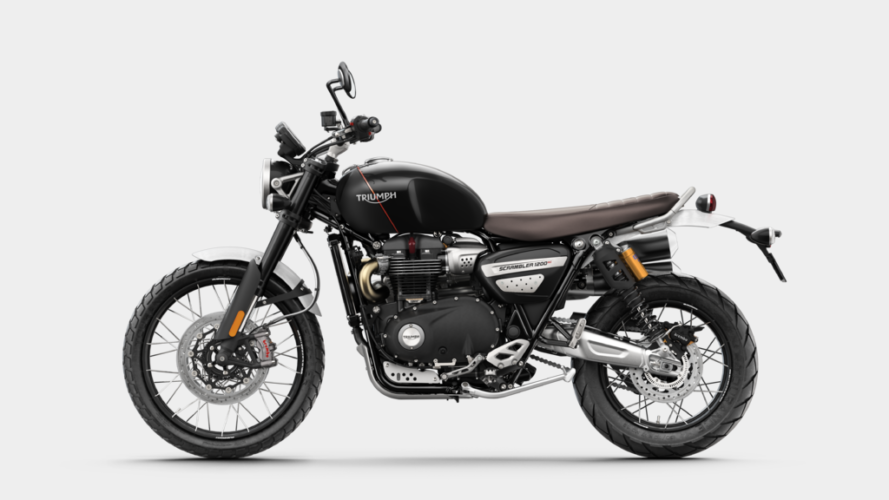 Introducing the Scrambler 1200 XC and Scrambler 1200 XE line up, all-new benchmark-setting motorcycles that represent a first for dual-purpose capability and modern custom style. These beautiful new 1200 scramblers deliver a category redefining level of performance, specification and finish, fused with Triumph’s iconic Scrambler DNA and all the capability of a genuine adventure motorcycle.

Built to deliver a sublime riding experience on every road, and packed with class-leading specification and state-of-the-art technology, these new modern classics take the legend that Triumph started to a whole new level. The first of a new generation, and the best in every dimension. The real deal is here.

Built for riders to personalise

THE ORIGINAL SCRAMBLERS & GENESIS FOR TODAY’S SCRAMBLER SCENE
Born from an unparalleled blood line, the new Scrambler 1200 line-up can trace its roots directly back to the original Scrambler scene in the early 1950’s, where Triumph played a pivotal role and set the template for what made a scrambler great.

Building the leading bikes of the day, stripped back with straight-through ‘twin pipes’ fitted high or low sling and chopped off – Triumphs were the original and real desert sleds. These inspired the world’s first production scramblers, with the Bonneville T-120TT, T120C and the TR6’SC’. And these were the bikes that Steve McQueen took to the desert, that Bud Ekins raced and won on, in the dirt, and that competed the most challenging desert races of all time – the Baja 1000. In 2006, with the launch of the very first ‘modern era’ Scrambler, Triumph again delivered the genesis of a new category. This triggered the world of Scramblers we see today and a whole new global fan base, from urban riders to movie stars, all in love with that iconic Triumph scrambler style and timeless silhouette.

TWO BENCHMARK SETTING NEW SCRAMBLER 1200s
Two all-new models comprise the Triumph Scrambler 1200 line-up. The Scrambler 1200 XC, which is built for the road and for real off-road riding fun, and the range-topping Scrambler 1200 XE, which takes the specification to the highest level and its off-road capability and scrambling credentials to the very top of the motorcycling world.

THRILLING PERFORMANCE
Both new Scramblers deliver category leading torque and a dedicated ‘scrambler tune’ courtesy of the latest generation Bonneville High Power 1200cc engine. The charismatic 270° firing interval ensures a smooth, linear power delivery from the slick six-speed gearbox. Evolved specifically for the Scrambler, the 1200 engine provides 90 PS @ 7,400 rpm, which is 12.5% more power than the Bonneville T120 and an incredible 38% more than the 2019 Street Scrambler. Additionally, the Scrambler 1200 power plant is tuned to deliver ‘high torque’ off-road and on, low down and across the mid-range, with peak torque of 110Nm at a low 3,950 rpm. This is also greater that the Street Scrambler by 37.5%. Delivering the Scrambler soundtrack is a beautifully crafted twin high level exhaust system with stainless steel headers and brushed stainless steel silencers for a deep punchy scrambler sound. Just like all the new generation Bonnevilles, the Scrambler 1200 engine delivers leading modern classic capability with ride-by-wire, as well as a sensitively incorporated liquid cooling system for enhanced performance and cleaner, more fuel efficient riding. Both Scrambler 1200 models also feature a high first major service interval of 10,000 miles/16,000 km.

CATEGORY DOMINATING CAPABILITY
Taking the capability to the highest level, the Scrambler 1200s feature a class-leading standard of rider focused technology, including:

Our testing team were amazed with the performance of the new 1200 Scramblers, and considered them to be actually more capable off-road than many of the adventure bikes they had tested.”
Emil Åberg
ÖHLINS Key Account manager – MC OEM

Both Scramblers also feature a new crafted long travel aluminium swingarm, which is longer on the XE version, making the new XC and XE truly capable in all riding conditions.

Topping off the high-specification engineering innovation there are premium Brembo M50 radial monobloc calipers, folding foot controls which are adjustable on the XE model, and first-in-class tubeless tyres and spoked 21’ inch front wheel.

BREATH-TAKING SCRAMBLER STYLE
These bikes have absolutely Scrambler-defining modern custom style with category leading finish and detailing, setting a new template for what a 21st century Scrambler should look like. Incorporating all of the original Scrambler design DNA and iconic silhouette the new XC and XE feature a host of signature scrambler details, including:

Reflecting its top-of-the-range status, the Scrambler 1200 XE comes with even more premium details, including being the first bike to carry the iconic Triumph triangle badge on the tank, plus:

The off-road accessories include:

Styling and practicality accessories include:

For longer distance escapes and daily practicality, accessories include:

TWO NEW INSPIRATION KITS
To showcase the dual-character of the bikes, we’ve created a set of two exciting inspiration kits to use as the starting point for riders to design their own Scrambler 1200 custom, or to have fitted as a complete set – the fully loaded Escape kit and the off-road, stripped back Extreme kit.

Showcasing the more overtly off-road and stripped back custom style accessories, including:

Adding to the hugely popular Bonneville clothing collection, Triumph has developed a dedicated range of Scrambler 1200 clothing, with a selection of short sleeve t-shirts, checkerboard goggles and a collection of riding and casual wear for men and women.