Okay, this isn’t at all what I expected.  As I rolled up to a stop sign my urge to blip the throttle at a standstill was unfounded since the little “Bull” fell into a gently loping idle without any help from my right wrist.  A surprisingly small amount of gas and an easy clutch release got the Bull rolling again, not the clutch-slipping, throttle-pinning I was expecting from a high-performance 60’s two-stroke racer-for-the road.  I puttered down the road with ease, but was beginning to wonder how this docile little Metralla got the reputation of being one of meanest 250cc street bikes of motorcycling’s Golden Era.  The wide bars and comfy foam-block seat felt quite nice and it kind of disappointed me.  Maybe the Metralla was just hyped up too much I thought, as I weaved my way through miles of Southern California suburbia.

As the stretch of glorious asphalt opened up in front of me, I chose my line and gently leaned into a slightly-bending left hander heading toward a quiet two-lane road away from housing tracts and strip malls.  I clicked into third gear and pulled back the throttle.   As the revs built a silky smooth wall of power propelled the feather light Metralla around the bend at a surprising rate of velocity.  No unpredictable hit of power as the two-stroke surged through it’s power band, just a smooth wall of speed carried the Spanish lightweight like a surfer catching the perfect wave.  Okay, I didn’t expect that either. 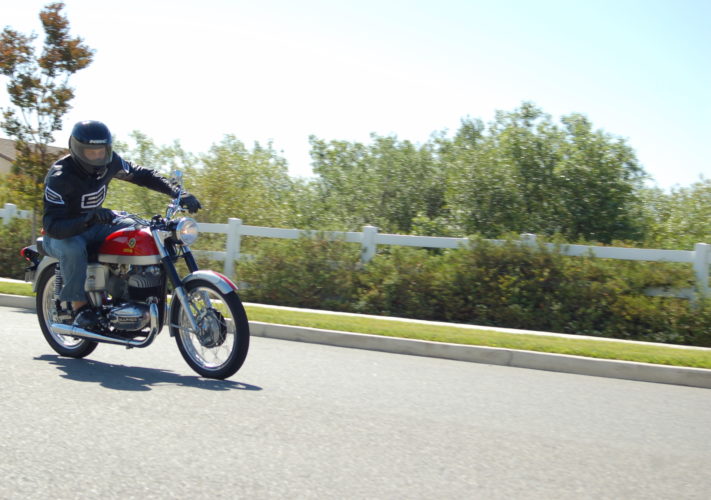 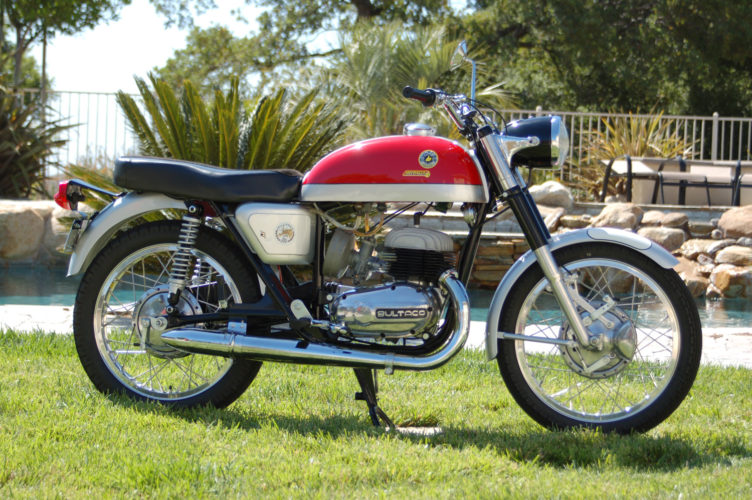 Apparently, this Metralla was every bit the motorcycle that went one-two in the Isle of Man 250 Production Class TT in 1967, it’s just a little more refined than I had thought.

In a lot of ways the Bultaco MK2 Metralla is a no frills, love it or hate it kind of machine.  You’ll either fall in love with this funky little Spanish bike or use it as evidence of why the manufacturer is no longer in existence.  In case it’s not obvious, I love this quirky pint-sized Bultaco.

As most uniquely designed European motorcycles, pictures just don’t do the Metralla justice.  In photos you cannot fully appreciate the wonderfully rounded gas tank and the way the gentle curve across the top line of the tank plays a sharp contrast to the ruler-straight bottom. The seat, another piece of the eye-candy puzzle, works wonderfully within context of the bike.  Not just your standard bench, the sculpted seat is wider at the front and has a strip of black suede down the center to help keep fast-throttling riders from sliding back on the slick leatherette.

The Metralla is full of complimentary parts like the fenders (white ovals for European licensing numbers are just pure class, but the way), slender exhaust, bulbous headlight shell, polished alloy headlight stays; each time you look your eyes catch something different.  Pretty standard looking when broken into it’s component parts, the Metralla is a stunningly attractive machine when all of these pieces are put into context.

As they say, “beauty is in the eye of the beholder,” and unfortunately the Metralla did not get an overwhelming welcome in America in the late 1960’s.  Incredibly, Bultaco Metralla’s like the one you see here spent many months, and sometimes years, collecting dust on showroom floors.  They just didn’t sell so great.  Like most things in life, the unloved and undesirable things become sought after and collectible treasures as decades pass by.  The Bultaco Metralla is no different and has become one of the rarest and most pursued two-stroke street bikes to be birthed out of the 60’s.  Basket case Metrallas commonly exchange hands for four times the original asking price of $699.  Show quality restorations regularly go past the $10K mark.  It took some time, but Bultaco’s Metralla is finally get the respect it deserves.

After years of anticipation I couldn’t wait to hop aboard the 250cc Spanish icon.  After all of the hype I was expecting a ferociously wild motorcycle that would require the utmost focus and concentration to ride properly.  My main goal was not to stall it, second was not to drag the clutch too much trying to find the power band.  I expected one of those bikes that was so demanding that if you dropped your guard for a moment it would make you pay for it by forcing you to feverishly kick it back to life amongst honking traffic, or by ripping down the street in an uncontrollable two-stroke blur.  Apparently, all of my assumptions were completely wrong. 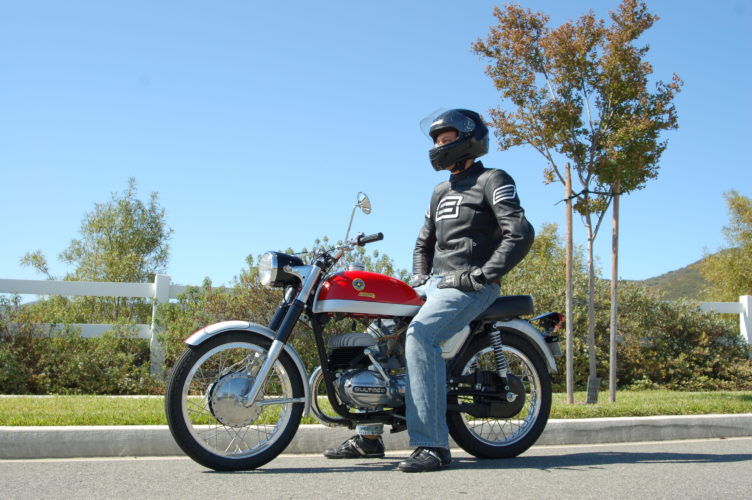 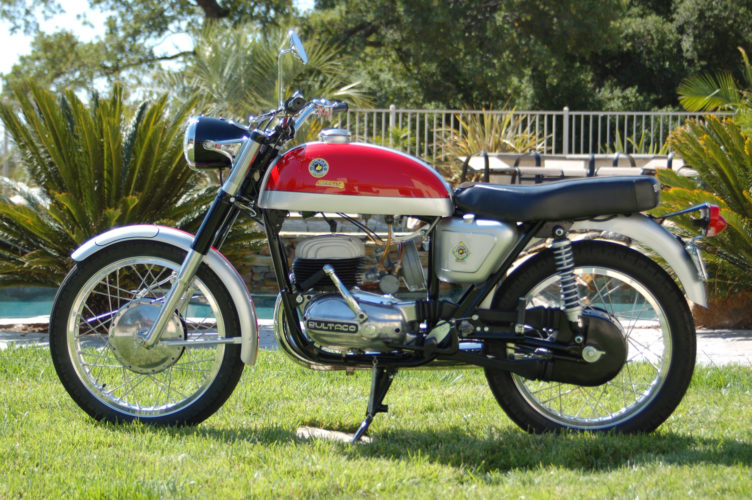 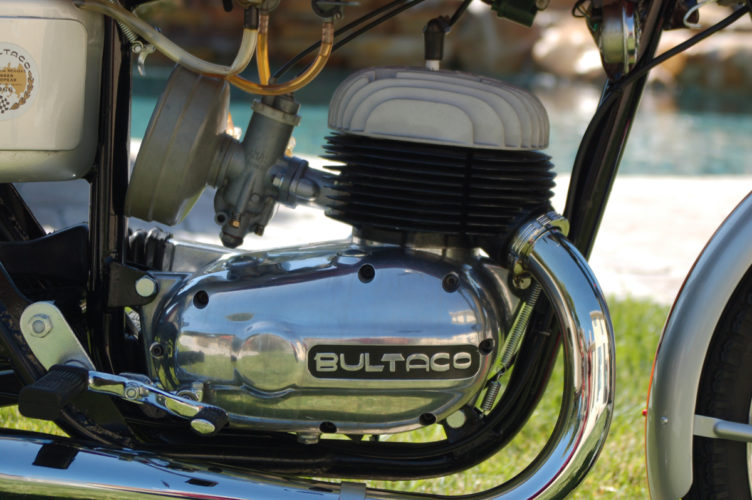 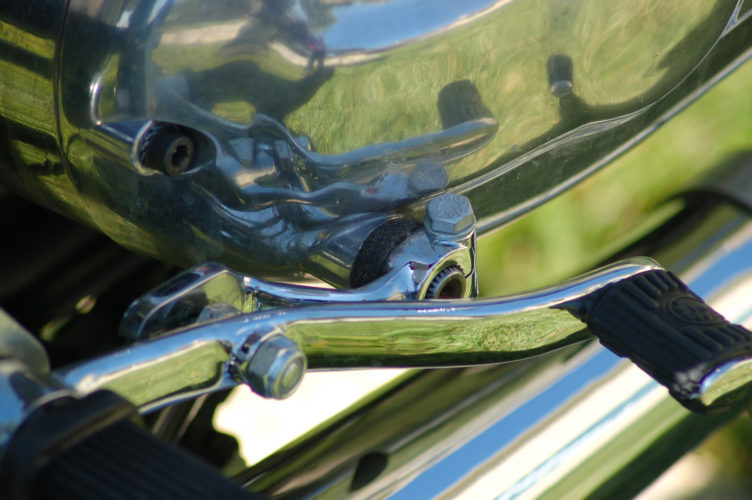 The Metralla was just about the opposite of all of my pre-conceived notions, the bad ones at least.  This Bultaco is the farthest thing from wild, in fact it’s perfectly tamed and is fully at the command of the rider.  Don’t mistake proper manners for a boring motorcycle though.   Think James Bond.  Refined, but very capable of turning up the excitement.

For a 27 horsepower, 250cc street bike capable of breaking the ton (that’s 100mph by the way) the little Bull packs its potential into a very tight package.  At 225 pounds (dry) the Metralla is small and light in every good sense, but has enough mass to insure that the rider won’t be mistaken for a Pepsi can by a Hummer driving soccer mom.  A six-foot rider can easily sit astride the Bull with feet firmly planted on the ground, leaving the rider wondering just how cramped the riding position will be.  However, the slightly rear-set pegs provide that extra bit of room making the riding position down right comfortable combined with the elevated bars.  There is also plenty of room to move around on the seat (or give a ride to a passenger) and find your best position.  All in all, it’s a sporty, but comfortable upright seating position which did not seem to put any unnecessary pressure on ‘acheable’ body parts whatsoever.  In a way, the Metralla could be a candidate for the first street-standard hooligan machine by combining rear-set pegs and upright bars.

The controls are easily accessible even though the chromed steal Bultaco levers do seem to stick out away from the bars more than most levers.  Aside for the clutch lever, the left handle bar also carries a horn, kill switch, and headlight adjustments, while the right side features a small lever which operates a cable to adjust the choke.  The handlebar mounted choke adjustment is nice touch and you will appreciate it even more if you have ever had to reach down and try to find a choke lever by brail as you are trying to warm up your machine.

With a left side kick starter as the only means of lighting the motor it seems easier to start the Metralla while on its center stand while standing next to it using your right foot.  After start up, only a minute or two on the choke was required until I was able to dial back the idle to farm equipment-like speed, something unexpected for a two-stroke motorcycle of this level of performance.

As any good motorcycle, the motor is really what gives the Metralla personality.  The roundy little two-stroke is remarkable, especially when considering that it is about as complicated as a box of Lincoln Logs.  It’s just your run of the mill piston-port two-cycle motor.  No reed valves, finger ports, or power jets are needed to make this motor come alive.  A 30mm Amal Monobloc carb feeds the single, which draws the fuel mixture down transfer ports to lubricate the crank and then up into a single-spark head and out the exhaust port.  That’s about as complicated as it gets.

Clutch action was very light on the Metralla and gave the rider no hint of hand fatigue during my ride.  The shifting was okay, but perhaps brings up the only negative thing I could say about the rideability of the Metralla.  Gear shifts on a Metralla need to be made in big, positive motions.  This is not because of a faulty gear box or poorly built transmission, but due to a unique sliding actuator which transfers the gear change movements to the tranny.  Instead of using the zero-play rods and aircraft style linkages common to most rear-sets, Bultaco utilized this unique sliding configuration which amazingly uses only two parts.

The sliding shift controls seem to function adequately as long as the rider doesn’t get shy about their shifting.  I hit a false neutral a few times, again most likely due to the fact that I was not shifting with enough gusto.  I would assume that after a short period of time most riders would naturally adjust their riding to make up for this making it simply a characteristic of the bike and not necessarily a downfall.

This Metralla had a taller than stock counter sprocket which meant that you were out of first rather quickly.  Once on the go it became clear that the Bultaco was one of the smoothest European 250s I have ever ridden-and this was a two-stroke!  Bultaco hit the nail on the head in the fly wheel department and low speed jetting, since the motor revved quickly yet never gave the feeling of sputtering out as you rolled off of the throttle.  Instead of performing the awkward maneuver of braking while gently blipping the throttle like many high-performance 250’s, the Metralla allowed the rider to forget about the throttle all together while on the clutch and take advantage of the more than effective front brake.

With no tachometer available it’s hard to say exactly when the motor starts to pull, but let’s say around four grand or so it begins to boogey. Once on song the Metralla pulls with beautiful predictability most likely a combination of spot on carburetion, mild porting, and a slender exhaust that helps create a revvable motor without the peaky, knife-edged power band commonly associated with a hopped-up 60’s stroker.  In true race trim, I’m sure all of this would change, but in road trim, the bike is as friendly as a sweater-wearing Mr. Rogers.

One of my favorite aesthetic features of this bike is the large scoop on the front twin-leading shoe front brake.  While he rear brake was typically mushy, but effective in slow speed braking, the front stopper was fantastic in all cases and was not “grabby” at slow speeds.  The large cooling scoop and aluminum mesh screen not only looks amazing, but should also help this little twin-leader cope from a little over use and heat up on those spirited canyon rides.

Overall, our experience riding Bultaco’s iconic Metralla was nothing like what I expected.  Docile around town and friendly on the street, this Bull also has the potential to carve any canyon with such precision that a Honda CB77 or Suzuki X-6 rider would wonder if that singing red blur was indeed a motorcycle that just passed by.  Perhaps, a Ducatií 250 Mach 1 would have the capability of hanging with a Metralla on a sporty ride, but once into town the Metralla would easily leave a Ducati rider frustrated as the Bultaco would gently idle away from a stop sign with the ease of a Vespa scooter.

It seems the Metralla is like the James Bond of motorcycles:  Civilized, respectful, and proper, but underneath all of that guise a thrilling daredevil waiting for the chance to show off it’s special talents. Use whatever poorly crafted analogy you would like, tamed, yet vicious circus tiger, James Bond…It’s no difference.  Just whatever you do, never underestimate the mannerly Bultaco Metralla.