I suppose you can trace this one all the way back to 1996, and me snagging my Dad’s newest issue of Classic Bike Magazine on my way out the door.  I’d surely pay for this later, you don’t take Dad’s magazines, and definitely not to school.  But for a teenager who was curiously obsessed with vintage motorcycles, any blowback from this slight transgression would likely be worth it.   All I was concerned with at this point were the white words placed on the lower, right corner of the cover, “Low Budget Duke: 350 Ducati Racer.”  This article was checking all the right boxes in my mind, because at 16 all I wanted to do was road race motorcycles, vintage motorcycles mores specifically, and a Ducati? Well, that was just gravy. 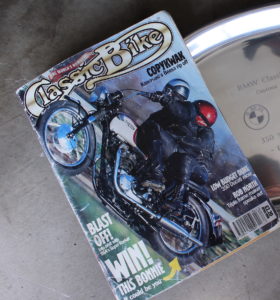 A few years ago I went through my Dad’s Classic Bike Mag collection….and there it was. It’s been thumbed through a few times as you can see.

I couldn’t risk getting the pricey, imported British mag taken by one of my teachers, I knew there’d be hell to pay by bringing it back late tonight, after my shift making hamburgers at Wendy’s closed off around 9-but coming home empty handed was not an option.  Class periods 1-4 blew by and I still hadn’t gotten an opportunity to read the article.  Soon after the metallic bell rang through the tiled halls I pushed my bagged lunch past the spring-loaded flap of the nearest trash can, and briskly strode into a dungeon-like room that smelled like dust and swarmed with the unfortunate outcasts of El Camino High’s second lunch period-The library.  I spent my 30 minute lunch break trying to keep my “I’m too cool for this place” face on as I read the best five pages of literature I had ever put my eyes to.  It was fitting I enjoyed such transcending prose in the library I suppose.

The article is a classic.  If you don’t have it, hit eBay for the 1996 April issue of Classic Bike Magazine.  The premise is an epic tale a kin to Odysseus’ or Gulliver’s.  Penned by Cycle World’s Jon Thompson, it details the finding of a scruffy old 350 Ducati basket case, turning it into an AHRMA road racer with some help from a few friends, driving from LA to Colorado to race the little beast, and then swallowing the jagged pill of defeat, only to resolve, fist in the air, to get em’ next time.  Its seriously epic stuff.  I was inspired to say the least.

As the years went by, my dreams of vintage road racing would appear and then vanish again as life does what it does best and side tracks you and adjusts your priorities without permission.  Not that all side tracks or priority shifts are bad, mind you.  So here I was 21 years later, leaning closer into my iMac’s screen, sitting in my man cave/office of vintage Ducati relics and regalia while my wife and two daughters assumed their occupations elsewhere in the house.  That 16 year-old reading Classic Bike Magazine in the school library hadn’t been heard from in quite a while, but here he was with all of his unapologetic enthusiasm, and cock-eyed optimism rushing back into my mind as I clicked on the simple gallery pic of a scruffy old 350 Ducati road racer that just showed up on the addictive online auction site often dubbed “evil-bay.”

Much like a certain song or a smell can take you back in time, the image of the scruffy little Ducati 350 road racer on the screen reeled back 21 years and I found myself sitting in that musty, nerd filled library again.  I quickly scanned the description to find that the bike had been raced in the 90’s in the AHRMA vintage racing series.  Raced hard by the looks of it, but successfully it said without detail.  The pics were small and the description vague.  It was not the same bike from the article I have read who-knows-how-many times, but it sure was similar, and built around the same time coincidently.

Not that I needed another project, my obsession with vintage Ducati motorcycles over the last couple of decades had led to a garage full of the Italian singles, ranging from restored, show-level exotica, to Craigslist-middle-of-the-desert-basket-case projects.  The auction had a “Buy it Now” with an “or Best Offer” option.  The BIN price was totally fair, if not a deal to be honest, considering the spare demo engine and assortment of valuable spares the bike came with.  As I sat at my restored 70’s metal tanker desk I had one of those, “let’s let fate decide” moments and tossed in a ridiculous, borderline insulting, offer and tried to move on with my afternoon.  The treadmill was calling my name, so in all of my 37 years of maturity and wisdom, I closed out the eBay auction page and decided it was time to don some paint-splattered running shorts and watch whatever Petrolicious episodes would distract me from the fact that I was now going to spend a great deal of time doing something quite stupid- running without going anywhere.

After three laps around my digital running track, something on my iPhone interrupted my warm up.  “Your offer has been accepted- Pay Now,” flashed across the little screen wedged onto the magazine tray of the treadmill.  Wait, what? It was one of those “come again” moments like you’d see in the 90’s sitcom Seinfeld, my phone playing the role of George Costanza or Elaine Benes.  I glanced around the room to see if my wife would catch my reaction to the fact that I just spent a fair chunk of money on something that she would surely disapprove of.  Shock melted into to fear, which gradually came back to shock, then skirted along the borders of excitement.  Fear again.  “Ooops,” the only words to come to my lips.

After about fifteen minutes dragging myself around the blue oval running track on the treadmill’s screen I reassured myself that buying an old Ducati race bike, site-unseen was in fact a good idea.  The absolute worst case scenario would be that I’d have a bunch of parts to use on future restorations.  A problem did arise quickly however.  In my excitement I neglected to check the bike’s location.  The bike was in Tennessee-I live in Southern California.  Not much of a problem really, I reassured myself again.  Time to hit up uship.com.  After years of tracking down vintage Ducati motorcycles, buying and shipping a motorcycle I have never seen across the country doesn’t faze me much anymore.

Stay tuned for Part 2 of “Low Budget Duke….Revisited” next week.

As always, we welcome your comments below.