The little Ducati racer showed up around 11 pm on a Thursday night.  The driver apologized for delivering so late, but I didn’t care.  I had an appointment with destiny, and destiny rarely picks convenient times to show up.  The garage door rolled up and my 80’s Ducati dealership sign illuminated the driveway.  As I turned sideways to scoot by the rows of bikes and handlebars that always grab my shirt, I heard the driver say, “It looks like I’ve got the right place.”  Yes.  Yes you do sir.

I spent the next hour or so taking inventory of the duct tape-covered boxes and giving my new-to-me Ducati race bike it’s first real look over.   It had the look of a racer that had been ridden hard and put a way wet, as they say.  Just like people, the real story of this bike will be told when everything starts going to pieces. 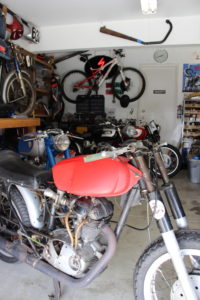 Vintage Ducati singles have a reputation of being finicky, difficult to live with, and too complicated for the average garage mechanic.  I guess this can be partly true and not true simultaneously.  These little, single-cylinder four-strokes are actually shockingly simple, with just a few peculiarities that can be a bit time consuming to get right- but can be done right by someone with the right tools and decent reserves of patience.  For most Italian bikes of the era, poor electronics and carburation marred the overall package.  Ducati singles are no different, and the crude charging systems and the sometimes unreliable Dellorto carbs gave a fantastic mechanical design a bum wrap.  I like to think of these as fixable quirks. 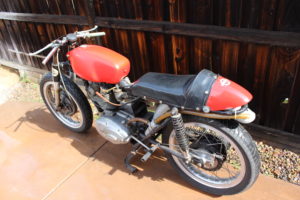 The mid-60’s Scrambler tank just might have to go.

By simply loosening the four head bolts and unscrewing the two racing oil drain lines, I was able to pull the entire cylinder head off in minutes.  This is of course thanks to Taglioni’s clever bevel drive overhead camshaft design that was used for nearly thirty years until the belt drive “Pantah” replaced these spinning driveshafts in the 80’s.  No head gasket on these guys either, just perfectly machined mating surfaces and a tiny o-ring to keep circulating oil flowing up to the cylinder head. The top of the piston had some carbon build up as expected, and the cylinder walls seemed great, no excessive wear of scoring to be seen.  The closed valves in the head were in a similar state, and definitely bigger than stock.  Five tiny allen screws hold down the rocker arm covers on the front and back fo the slightly inclined head, and three more allens secure the cam shaft/bevel drive top cover.  Removing these 13 little fasteners gave me a wealth of information as I found a highly modified 350 top end in fantastic condition that would have cost me thousands to replicate. 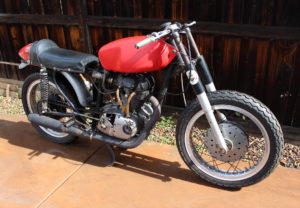 Highlights of this worked over little Duc head included coiled valve springs (replacing the sometimes “floaty” butterfly springs), larger valves and guides, ported intake and exhaust tracts, a second spark plug for increased detonation, what looked like an aftermarket (Megacycle?) high lift/duration camshaft, and specially coated/hardened valve rockers.  Slipping off the cylinder revealed a short-skirted high-compression piston, teflon “buttons,” and the piece de resistance, a glimmering Carillo rod jutting out of the crank.  Dear reader, I’m not sure if the aforementioned features of this engine meant anything to you.  However, let me tell you, if I was the type of guy that teared up at emotional moments, I would have shed a tear that night.  Since I’m an emotionless man-child, I just smiled like an idiot.  Smiled a lot. 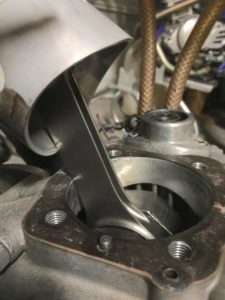 Carillo rods are THE connecting rods to have.

The only real head scratcher of this evening’s discoveries was the carburetor.  A gorgeous remote-float Dellorto, with gaping bell mouth seems like a reasonable choice, but at 30mm, it’s quite small for a 350 Ducati racer.  250cc Ducati Mach 1’s came with 29mm Dellortos as original equipment, so a Ducati 350 specifically made to ingest large amounts of air and fuel would usually have something closer to 34-36mm.  The Ducati racer in the 96 issue of Classic Bike used a 36mm Amal.  I’ll leave the 30mm Dellorto for now, but this seems odd to me.  Perhaps this was a torque motor? 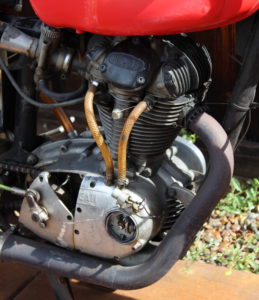 The simple exterior oil lines cool the oil, as well as get it back to the bottom end quicker than traveling down the bevel tube.

A quick look over the chassis revealed a bit more stock components that I expected.  The standard 31.5 mm forks were still used.  Good forks, but come on 31.5mm?  I think I may throw some 35’s on there for peace of mind, if anything else.  The stock passenger pegs were utilized as rear sets-standard racing practice on these bikes.  On the rear were a chubby set of Marzocchis.  The wheels were on WM3 shouldered alloy rims front and rear, the front, clearly a twin leader from a Honda 305.  The rear brake was stock, but with the backing plate machined to give cooling air a chance to reach the brake shoes.  The tank and seat found on this bike are clearly function over form-A mid 60’s Ducati Scrambler tank and your typical button-covered cafe seat.  These seem to be “get the job done,” types of parts.  After years or restoring motorcycles for both form and function, this bothers me. And the fact that this bothers me, bothers me. I might have to do something that will likely garner much criticism in the bodywork department.

I guess the next step will be to start disassembling this bike and deciding what to leave and what to change.  I have already had several comments of “if it ain’t broke, don’t fix it,” and “why mess with something that works.”  These are all valid, and wise adages.  But, does something have to be broken in order to be improved?  My decision is to keep the bike as close to original as my brain will let me.  The forks, and possibly the tank may by swapped out for something I already have bouncing around the shop.  That crusty old 125 Sport tank that’s been hanging on my wall for the last ten years would look pretty cool.  Do aesthetics count on the race track?  Well, no-Not really.  But as Arrested Development character, Tobias Funke quite wisely opined, “But it might work for us.”

As always, we welcome your comments below.

The magazine and the bike that started this entire crazy obsession of mine. See, it’s not my fault….I’m a victim.