While stomping through puddles and scanning the soaking wet parts at the El Camino Motorcycle Show and Swap Meet last weekend, I saw a familiar bike, then a familiar face.  It was the Aermacchi 350 road racer we featured a few months ago, and the bike’s jovial creator, Jim Connelly.  Jim admittedly brought the gloriously-red Aermacchi as eye-candy to attract people to his swap meet spot-it worked like bees to honey.  If the red ‘Macchi didn’t do the trick, Jim had a backup-an unusual kingfisher blue Ducati Mark 3. 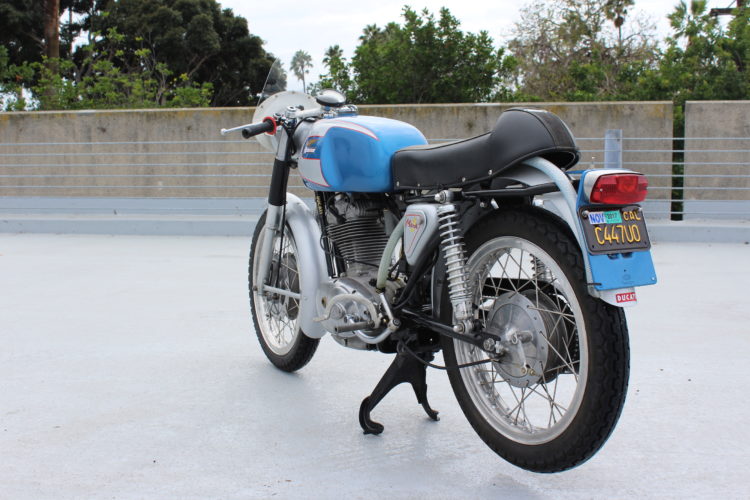 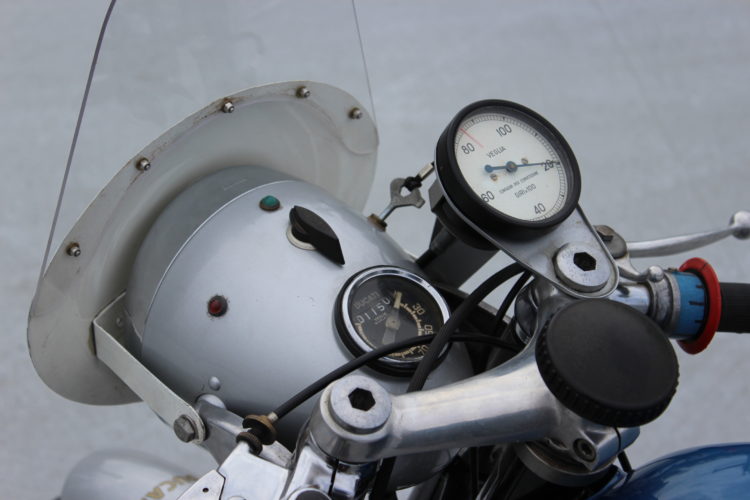 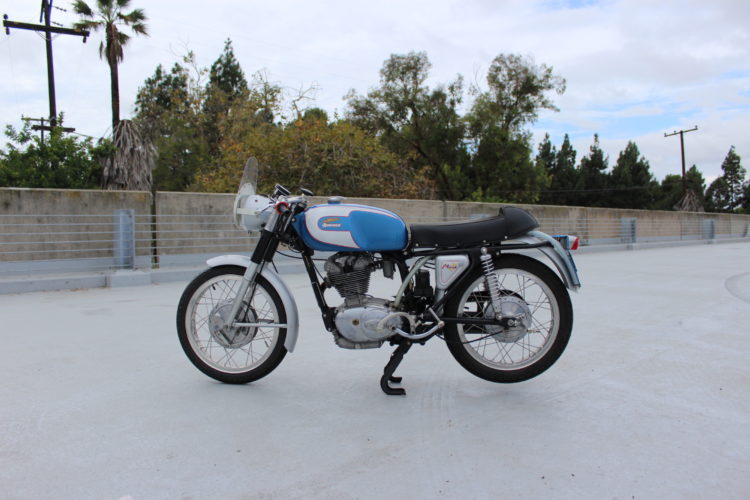 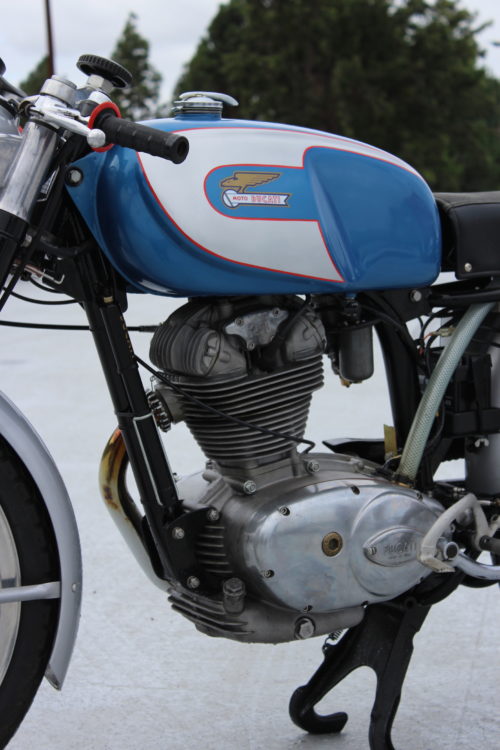 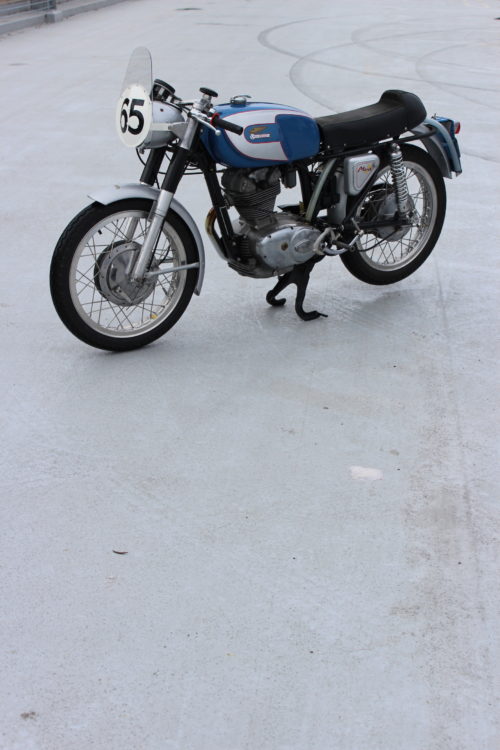 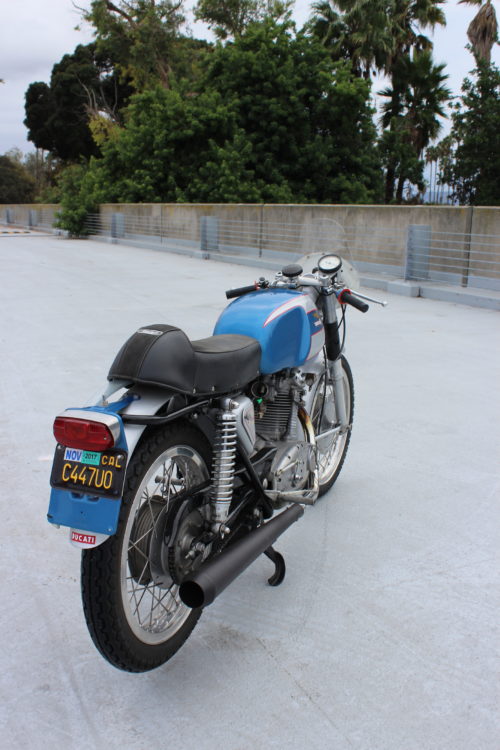 The 1965 Ducati Mark 3 250 you see here was the five-speed update to the 4-speed Diana Mk3.  The 1963 4-speed MK3 Diana was finished in kingfisher blue, and was barely street legal, with a massive Veglia tach, no speedometer, brake light switch, horn, or even key!  The 4-speed Diana was always a bit awkward though, with clip-on bars, but forward-set foot pegs, and a narrow bench seat.  By 1965 the bike became a 5-speeder, with bigger valves, bigger carburetor, and was claimed to be the first truly 100 mph 250cc motorcycle.  Ducati got the ergonomics a bit better too, with rear-set foot pegs, an actual speedometer, and a fully-functioning rear brake light.  But, they still forgot the key! (Jim added one to his bike for obvious reasons).  The newer Mark 3 had a racier seat with a suede covered “bum-stop” to keep you from sliding back too far.  Differing from the 250cc Mach 1 slightly, the Mark 3 came equipped with a flywheel magneto (no battery needed), a black frame, red tank, and a funky cut-off switch on the tail light to re-route the electricity back to the spark plug when the rear tail light burned out. Yes, the tail light was wired in series with the spark plug.   Italian bikes have a bad reputation in the electronics department for a reason!

Jim takes advantage of a short reprieve from the rain to wake everyone up with his snarling Diana Mark 3.

What makes Jim’s Ducati Mark 3 just a bit different than the others is the paint scheme.  Very few of the very early 1965 Ducati Mark 3’s carried the kingfisher blue paint scheme over from the 4-speed model.  Nearly all of the 5-speed Mark 3’s you see today are red and silver.  If Jim’s bike was originally of those few models could be up for debate, but what is not up for debate is the finished product: A jaw-dropping motorcycle that just drips with class.  With the optional megaphone and flyscreen, the kingfisher blue Mark 3 doesn’t even need the missing horn, you can hear it coming!  Another interesting note, that number “65” clearly displayed on the fly-screen was hand lettered by a guy that’s pretty good with a brush, you may have heard of him:  Troy Lee.

A special thanks to Jim Connelly for sharing yet another wonderful classic with us….what else is in your garage, Jim? 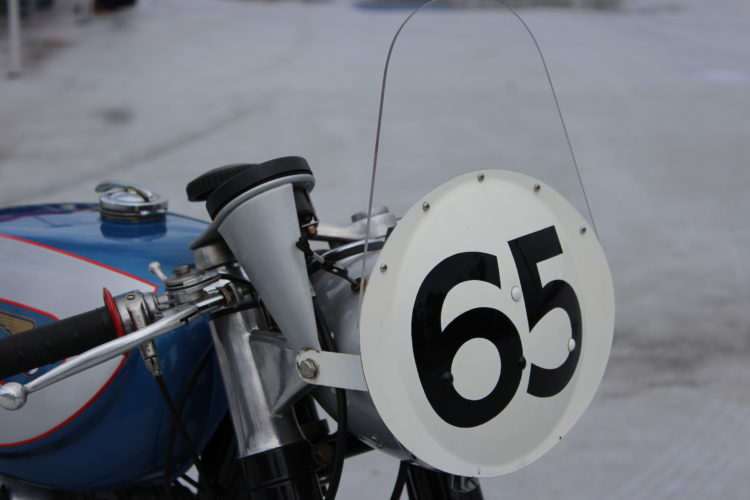 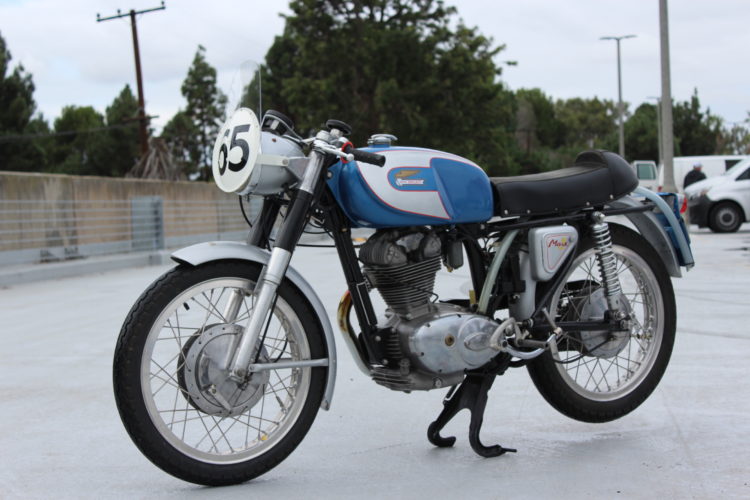 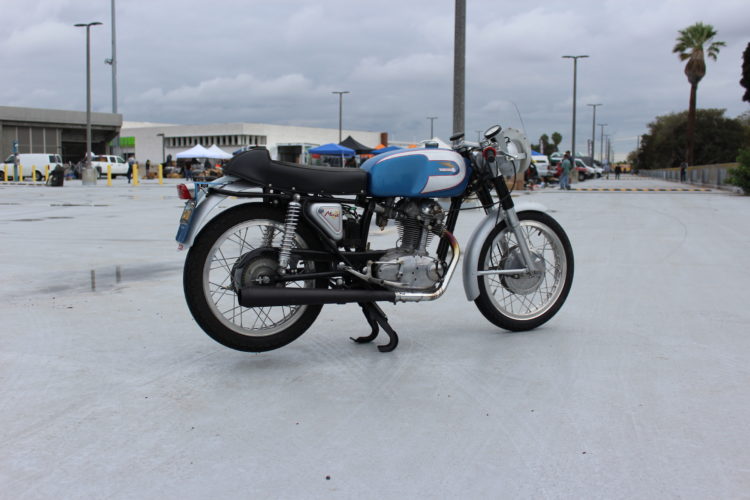 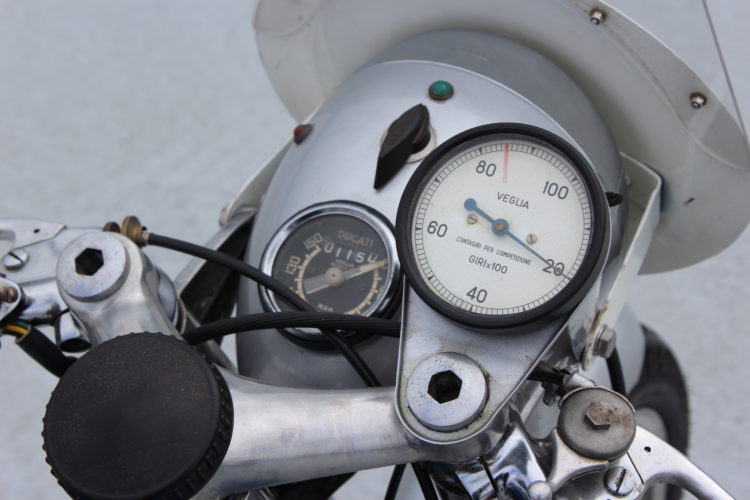 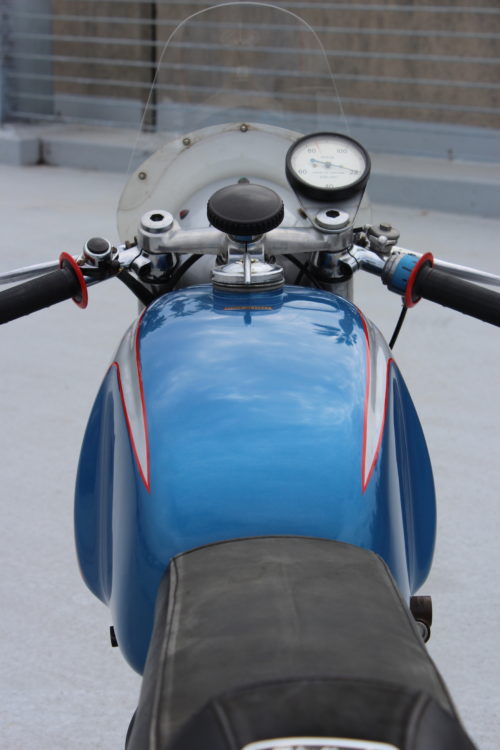 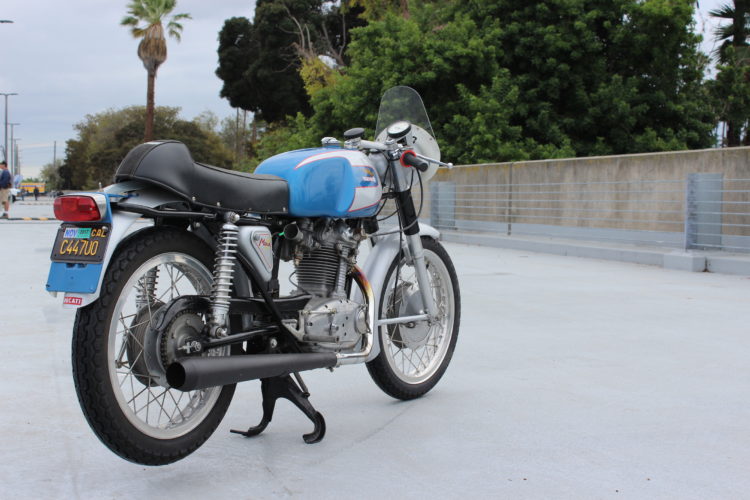