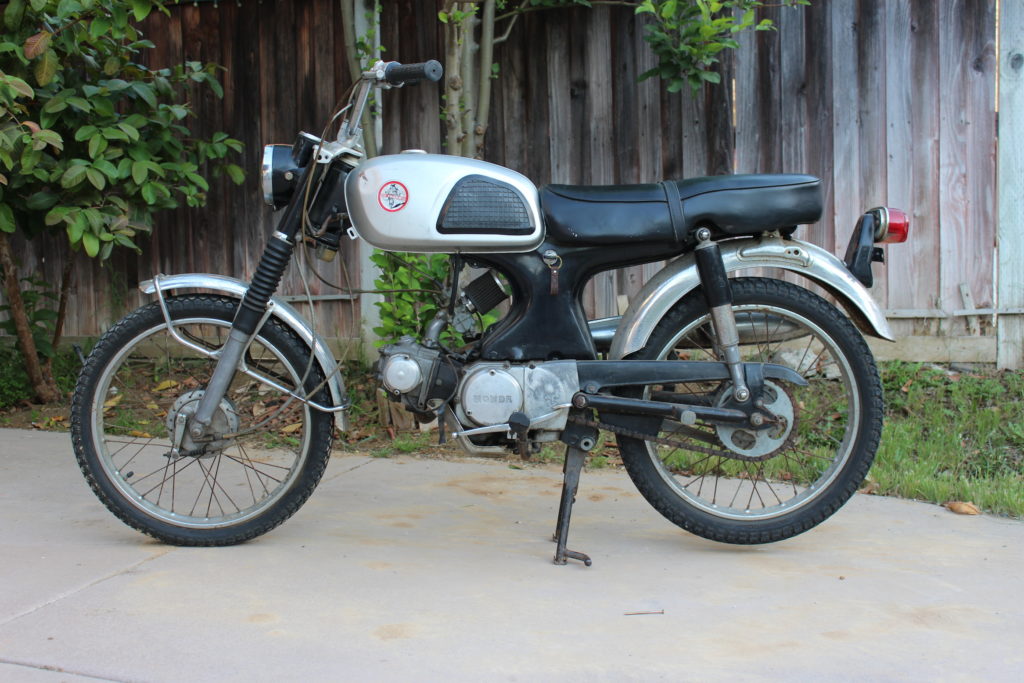 Well, that didn’t take too long-I found a project bike.  In our last installment “So You Want to Fix Up An Old Motorcycle?” we declared the goal of finding, fixing up, and enjoying a vintage motorcycle-all the while keeping to a modest budget and a modest set of skills that any reader could employ themselves.  With an “all-in” budget of less than a grand, our playing field for project bikes narrowed down to more of a bowling alley.  Luckily, an awesome bike popped up on Craigslist surprisingly quickly.  You’ve probably all heard of the iconic Honda S90.  This was one of the “You Meet The Nicest People On A Honda” bikes of the 60’s.  They’re fantastically simple, extremely reliable, easy to get parts, and powerful enough to grab some coffee or run some quick errands around town.  Not as many people are familiar with the S90’s somewhat cooler sibling, the CL90.  Essentially the exact same motorcycle, but with a grey, offroad-ish tank, upswept exhaust, higher (barely) front fender and bars, well, that’s it…it’s basically a “parts bin special” Honda put together when they tried to capitalize on scrambler sensation birthed out of Southern California.  Long story short, a fantastic example showed up on Craigslist, and for $500!  Yes please.

The bike ticked all of the right boxes for this project.  The seller claimed the motor turned over, the paint and chrome weren’t too bad, and it was essentially complete.  But, the pics online showed that the wheels looked terrible, it didn’t run, and some electrical tape here and there probably meant someone did something they shouldn’t have to the electrical.  There was also no paperwork for the bike, not a deal breaker, but a pain in the butt for sure. 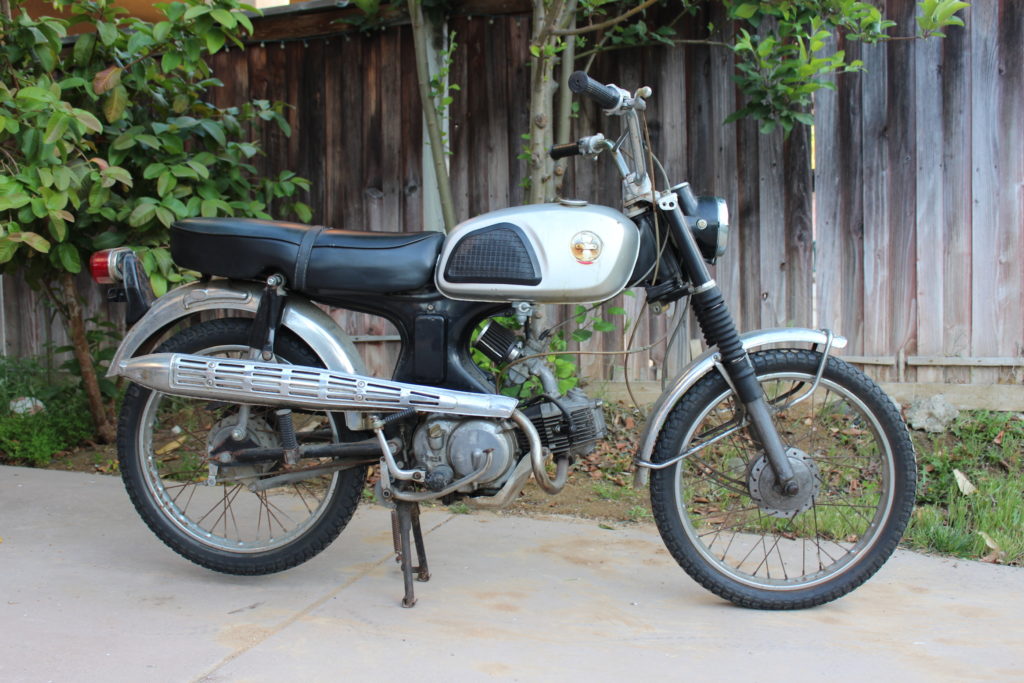 But, of course the bike showed up on Craigslist at a pretty awful time for me, I didn’t have a minute to spare, let a lone the couple of hours it would take to drive out to Pasadena and scoop up the little Honda.  Competition in the LA area is fierce, the little Honda would be gone within a couple of days of the ad being spotted for sure.  I mentioned it to my buddy John, and without even asking he offered to go pick up the bike for me.  This would be a fine example of another benefit of this fantastic hobby of ours, you can make some really great friends.  John and his wife made a morning of it, swung out to Pasadena and picked up the Honda CL90, got breakfast, and had the little Honda ready for me at their place to come get at my convenience.  Oh, and he got it for $400 too!  Wow.

After an enjoyable visit to John’s I got the little Honda Scrambler back to my garage to give it a look over.  It didn’t look too bad, but not too great either.  My hopes of keeping all of the paint stock faded as I saw the fork impact dents on the front of the tank on both sides revealing bondo from a repair that didn’t quite take.  Swinging the forks back and forth showed that the forks stops keeping the tank free of impact were non-existent.  Okay, we’ll fix that.  The center stand had a wobble, we’ll check that out too.  The spokes were rusted beyond the capabilities of steel wool, the forks seals and boots shot, the keyed ignition was gone, and the chrome that had looked good in the four inch pics online looked pretty bad when un-digitized, under the summer sun.  But, wait!  There’s good news!  The motor had good compression, the seat cover looked good, the chassis paint looked save-able and all of the major parts were there.  Unless there is a big problem hidden somewhere, I think we’re going to do okay, and stay well under our $1k budget easily.

Tonight I’ll hit ebay for a few bits.  Spokes, fork seals/boots, tires, tubes, cables, carb rebuild kit, battery, and keyed ignition our on the list.  Stop by soon to see what happens when we tear into this epic little Honda Scrambler 90……this should be fun. 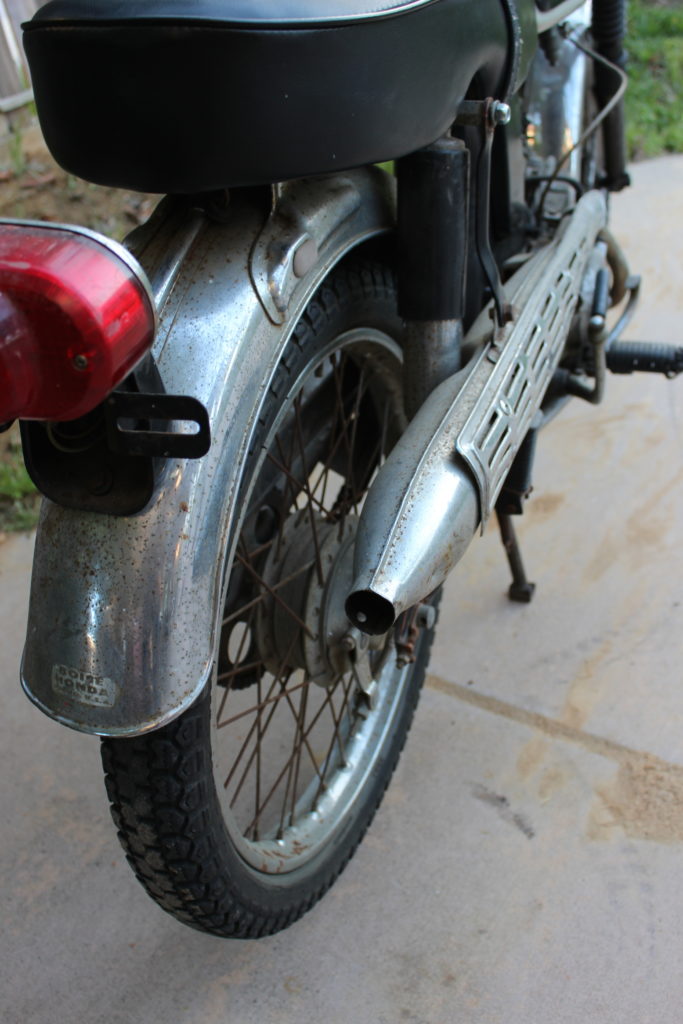 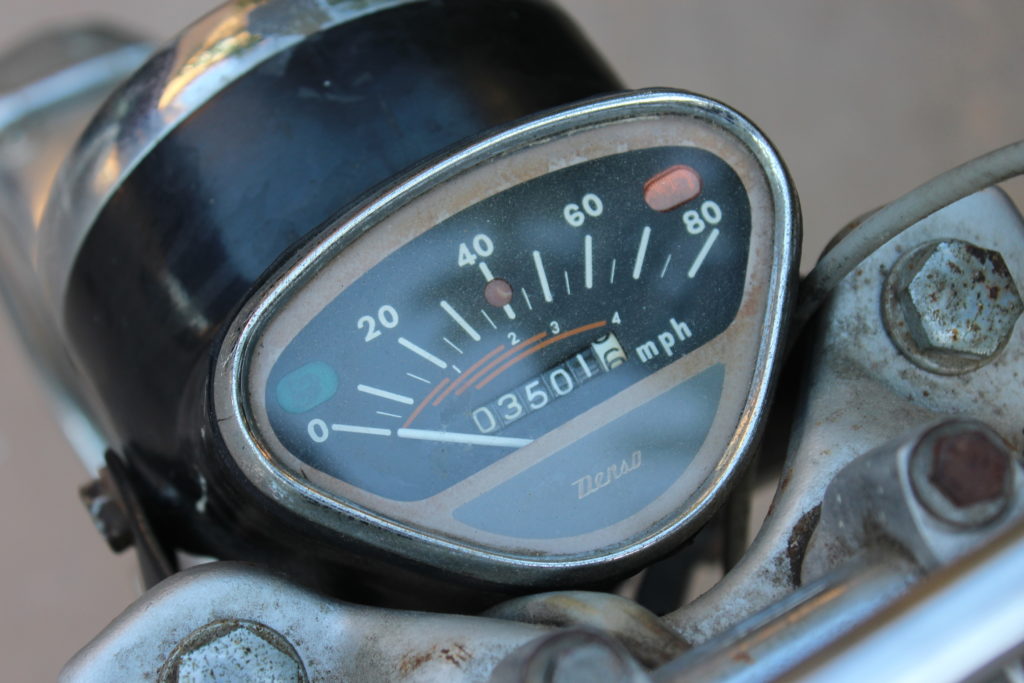 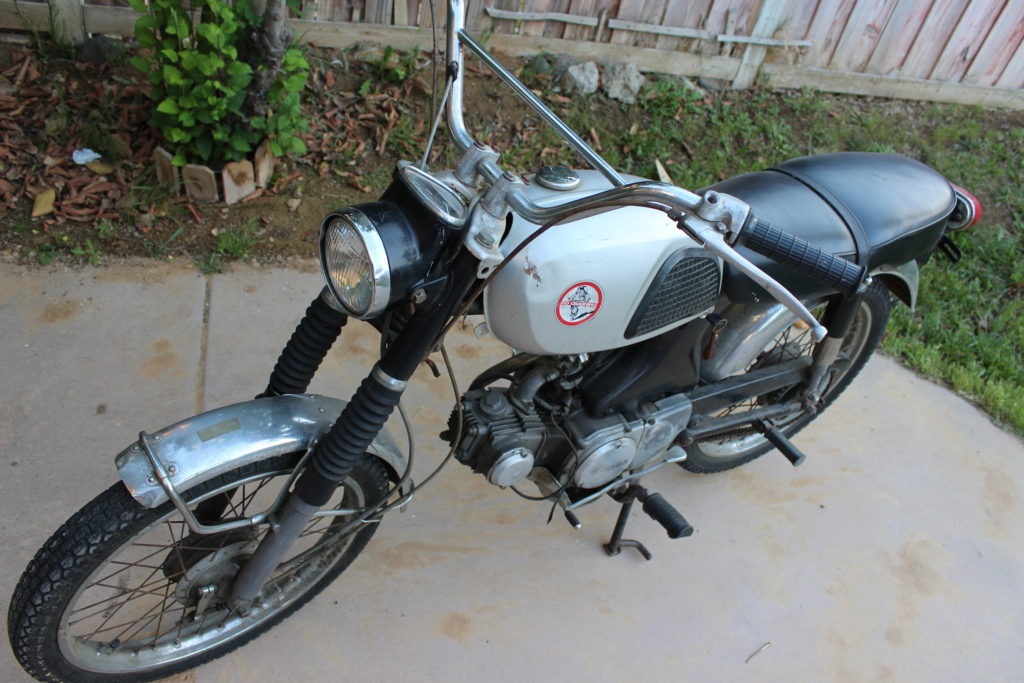