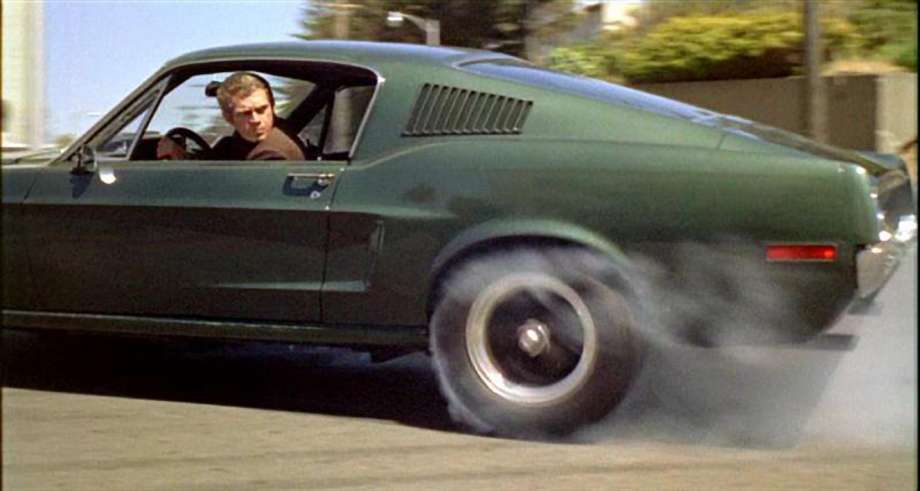 The Ford Mustang piloted by legendary actor and motorsports enthusiast Steve McQueen during the 1968 film Bullitt left a lasting impact on movies and pop culture since its release. In Bullitt, McQueen played the title character, a SFPD detective trying to bust a mob ring.

The 9-minute and 42-second chase scene was revolutionary for its time – putting the audience inside the vehicle while driving on actual roads and building suspense without any spoken dialogue – a film style that would later define Director Peter Yates’ vehicle chase scenes. The authentic feel of Bullitt was achieved through a number of factors including real stunt driving, where drivers reached speeds as high as 110 mph through the streets of San Francisco, only possible because San Francisco’s Mayor Joe Alioto – who only charged one dollar for permission to film – recognized how much publicity the city would get from a McQueen movie.

Rather than building lavish sets, the filmmakers were able to utilize many parts of the city as a backdrop. “Steve McQueen was one of those rare individuals who was able to infuse his passion for motorsports directly into his films, and there’s no better example than Bullitt,” said AAT Vice Chair David Madeira. “It’s not every day that we get the chance to showcase a vehicle that has made such a lasting impact on the way cars are presented on film. It’s humbling to share the long and storied history of this Mustang with ACM guests.” Two Mustang GT 390s were modified for the making of Bullitt – which included a dark Highland Green paint scheme, no exterior badges, scoops or spoilers and adorned with a black-mesh grille absent of Ford’s iconic pony badging. Of the two, this is the only surviving car.

While the car would live on as a daily driver for the Kiernan family, it eventually wound up being stored in their garage in Tennessee for years before being resurrected, thanks to the thoughtful recommissioning of his son, Sean. The Bullitt Mustang, still rocking its original paint and remaining largely unmodified, was showcased at the 2018 North American International Auto Show (NAIAS) nearly half a century after the movie premiered alongside a new tribute model from Ford.

Following its reemergence at NAIAS, the Bullitt Mustang became the 21st vehicle inducted into the Historic Vehicle Association’s (HVA) National Historic Vehicle Register and its documentation, photographs and history will be archived in the Library of Congress so that future generations can see the car as it stands today. “The story of this vehicle is as unique as the car itself,” added Madeira. “We’d like to thank Sean and the HVA for giving us the opportunity to celebrate the history of one of film’s most influential cars.”

ACM will be holding a screening of Bullitt and a Q&A with the car’s owner, Sean Kiernan, in late January. Details for the event will be revealed at a later time on ACM’s website, americascarmuseum.org. About LeMay – America’s Car Museum (americascarmuseum.org) America’s Car Museum (ACM), a member of America’s Automotive Trust, is an international destination for families and auto enthusiasts to celebrate America’s love affair with the automobile and learn how it shaped our society. Based in Tacoma, Wash., the stunning 165,000-sq.-ft. facility has been recognized as one of MSN’s 10 Best Automotive Museums worldwide, USA Today’s 10 Best Museums in Seattle and KING5’s Best Museum in Western Washington.

ACM serves as an educational center for students of all ages, features 12 rotating exhibits and hosts AAT’s annual Signature Events. For more information, visit americascarmuseum.org. To purchase tickets or become an ACM member: Click Here About America’s Automotive Trust America’s Automotive Trust (AAT), headquartered in Tacoma, Washington, is a not-for-profit corporation that seeks to secure America’s automotive heritage and to transfer the skills and knowledge necessary for the future of collector vehicles and the enthusiast community for generations to come.

AAT is made up of four founding members: LeMay – America’s Car Museum, the RPM Foundation, Club Auto and the Concours Club. For more information on AAT, visit americasautomotivetrust.org. About the Historic Vehicle Association The HVA is dedicated to preserving and sharing America’s automotive heritage. In 2014, the HVA established the National Historic Vehicle Register in partnership with the U.S. Department of the Interior, Heritage Documentation Programs and Library of Congress to document historically significant automobiles in America’s past. The HVA is supported by over 400,000 individual historic vehicle owners, key stakeholders, corporations and benefactors. Please visit: historicvehicle.org ###

The historic movie vehicle driven by Steve McQueen will be on display in the Pacific Northwest Contact: PCG – Eric Pylvanainen (424) 903-3685 epylvanainen@pacificcommunicationsgroup.com