The name Bud Ekins holds quite a lot of significance over here in the US.  His association with Steve McQueen is that of legend, and his the building where his old Triumph shop off of Ventura Blvd, in Sherman Oaks, California ,should really be under watch by the Los Angeles Historical Society.  He was a racer, a stunt man, (Ever seen The Great Escape?) and just all-around motorcycling greatness.  When I saw that his original condition Triumph TR6SS ISDT bike was going up for auction at the annual Spring Stafford Sale I was more than curious.  When I saw the estimated auction value at around $25k I was shocked.  Surely such an iconic motorcycle would be work several times that.  It turns out, I was right.  It sold for $124,389.  That’s more like it.  Who knows where the well-used, crusty old Triumph will end up, but I hope it at least goes somewhere people can see it, and enjoy studying every nick and scrape. 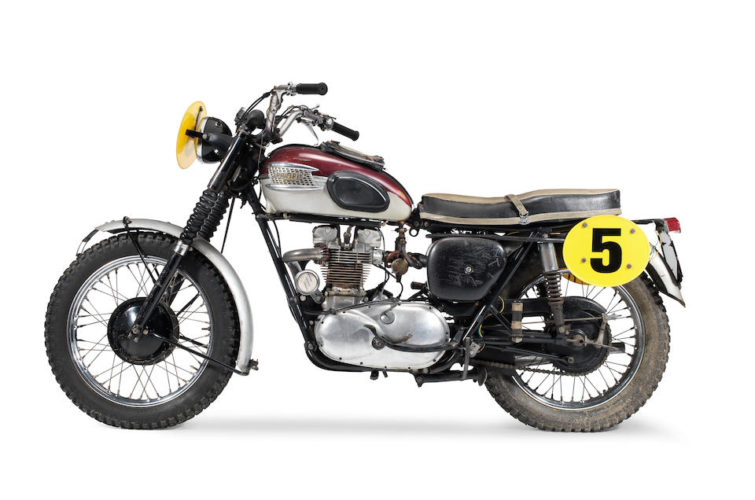 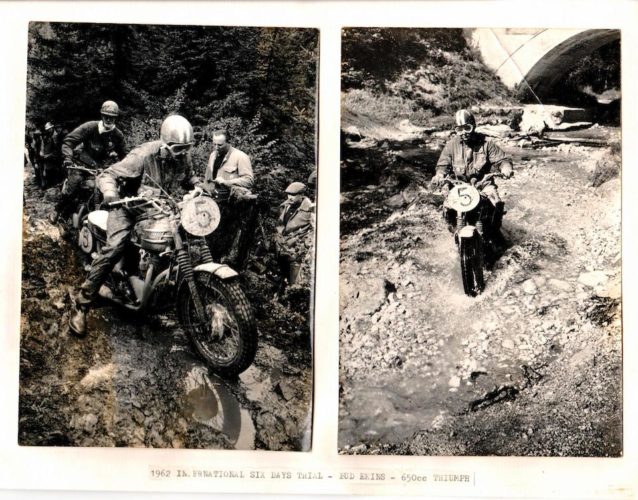 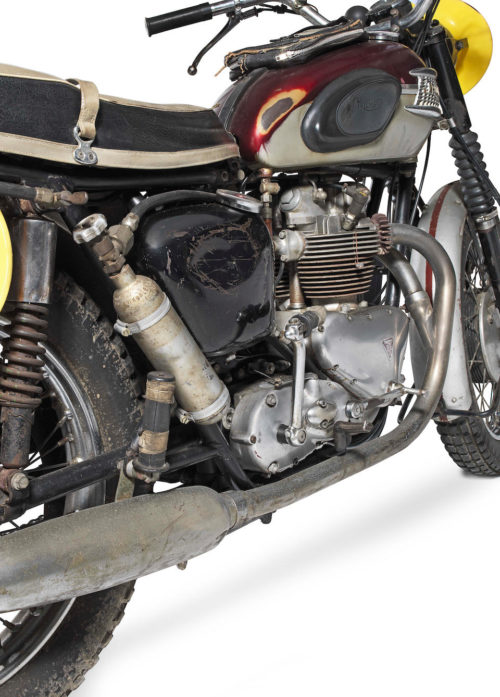 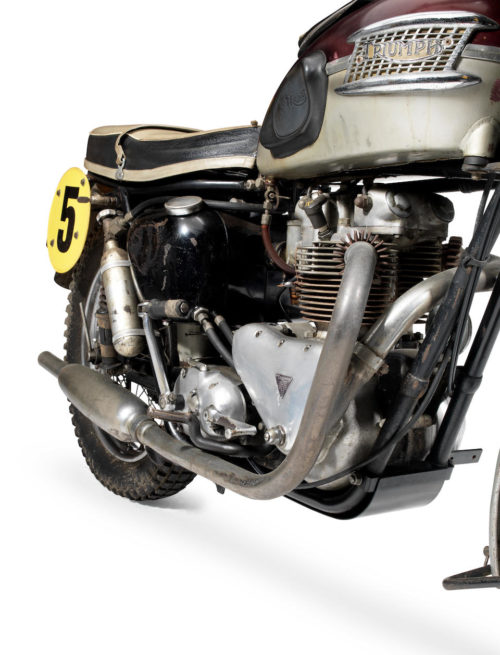 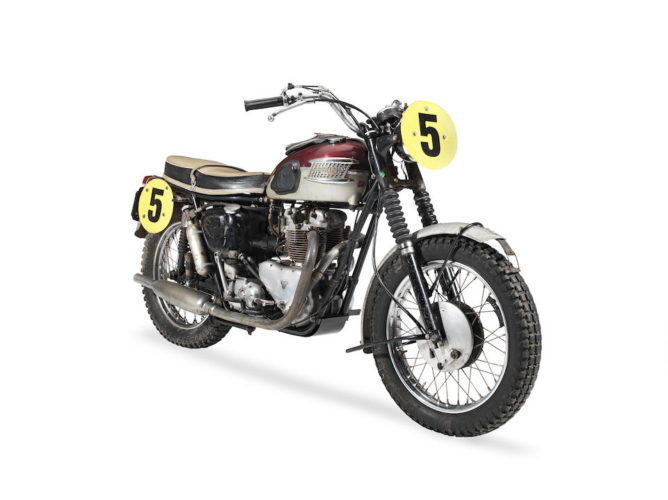 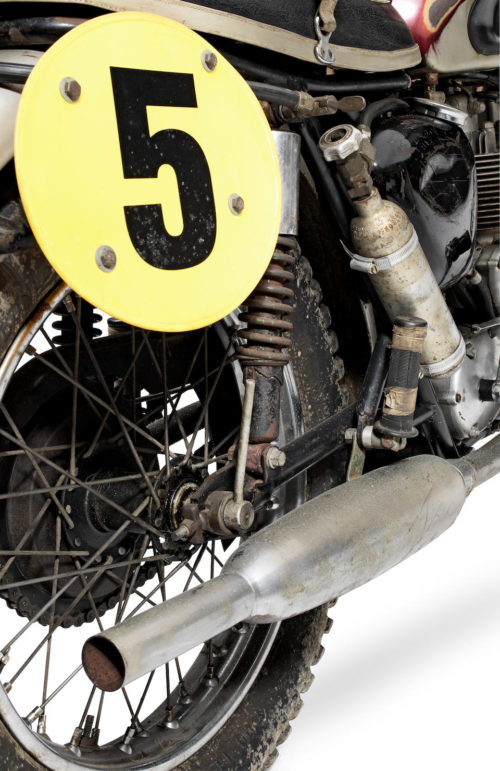 Information on the Bud’s old Triumph from Bonhams Motoring is below:

The ex-Bud Ekins; 1962 ISDT Gold Medal-winning
1962 Triumph 649cc TR6SS Trophy
Registration no. YSU 295
Frame no. D17866
Engine no. TR6SS D17866
• Authenticated by Bud Ekins
• Purchased from Eric Cheney in 1989
• Outstandingly original
• 4,478 miles from new
• Comes with a framed 1962 ISDT poster and the cup awarded to Bud Ekins for his individual class winSuccess in the International Six Days’ Trial (ISDT) in the late 1940s prompted Triumph to adopt the ‘Trophy’ name for their off-road-styled twins, at first for the 500cc TR5 and then for the 650cc TR6. For 1962, the final year of the traditional ‘pre-unit’ Triumph twins, the Trophy was designated ‘TR6SS’. The TR6SS is one of the rarest of all post-WW2 Triumphs, being produced for the ’62 season only. That same year the TR6SS offered here was ridden by Bud Ekins in the ISDT in West Germany, enabling the great American rider to win his first Gold Medal in the event. A consummate off-road racer, bike restorer, occasional stunt rider, and all-American hero, Ekins was a close friend of actor Steve McQueen and performed the famous motorcycle jump (as McQueen’s stunt double) in the movie The Great Escape. (Although the movie was set in WW2, Bud’s bike was in fact a post-war Triumph dating from the mid/late 1950s). The Great Escape was being shot in Germany in 1962 and Ekins thought it would be a good idea to combine his film work with participation in that year’s ISDT, held at Garmisch Partenkirchen. Triumph agreed to supply a suitable factory-prepared machine, which was flown to Germany and first registered there. After the event, in which Bud not only gained a Gold Medal but also won the Unlimited Capacity Class, the Triumph was flown back to his home in California and registered there as ‘CAL 142080′.

Many years later, when Bob Gardiner began assembling his collection of historic ISDT machinery, he got to know scrambles star turned master frame-builder Eric Cheney, who had developed business links with Bud Ekins. Bud had begun shipping consignments of British motorcycles to Eric for sale in the UK, and one of these batches of machines included his ex-ISDT Triumph Trophy of 1962. Knowing of his (Bob’s) passion for such machines, Eric offered it to Bob Gardiner, who did not hesitate to add the Triumph – un-restored and virtually 100% original – to his collection, completing the purchase in October 1989.

In December 1989 Bob wrote to Bud asking for clarification of a couple of points, and received a reply confirming its provenance (see correspondence on file). Later on, when the American came to England, Bud gave Bob a poster for the 1962 ISDT and the most impressive cup he had been awarded for his individual class win. Both of these important items are included in the sale together with the aforementioned California license plate, while the history file contains the 1989 purchase invoice; the aforementioned correspondence (and other letters); numerous press cuttings; and old/current V5C documents (perusal recommended).

When acquired, the Triumph had covered a little over 4,000 miles from new and was original apart from the front mudguard, which had been trimmed to accommodate an oversize tyre. Fortunately, an autojumble turned up a suitable replacement, which was not only the right colour but also appropriately patinated.

In an article written for The Classic Motor Cycle, Roy Poynting summed up Bud Ekins’ achievement on his Triumph Trophy at the 1962 ISDT: ‘There is nothing actually wrong with the Trophy – indeed there’s a lot that is right – the machine floats imperturbably over rough terrain at an impressive rate. But it can still be a real handful. Its combination of bulk and speed means that when unexpected obstacles arise, they will more probably be demolished than avoided. And as for negotiating the steep, rocky and twisting mountain paths, likely to be encountered in the ISDT, the Triumph is just not in the same game as purpose-built lightweights.

‘It all just emphasises the brilliance of Bud Ekins, who was riding as a privateer on an unfamiliar machine. The weather conditions were appalling, too, with torrential rain turning Monday’s route into what the Motor Cycle described as ‘a morass of mud’. More riders retired than won Gold Medals; yet Bud featured in the latter group, and gained one of the most prestigious individual awards. Perhaps the Triumph was the right machine for the job, after all … in the right hands!’