We were pleasantly surprised to hear the throaty bark of a single-cylindered bike make the approach in to Willow Spring Raceway’s uphill “Omega.”  My brother and I stood up to search for the unique sounding bike among the wave of Ducati twins, Yamaha R1’s, and the occasional Honda CBR.  And there she was, one of the most stunning Aermacchi singles we have seen in recent memory.  Aermacchi singles are four-stroke, vertically aligned Italian built singles, kind of similar to our Honda CL90 project bike in motor design.  The Aermacchi was hardly a technological wonder though.  Pushrod operated valves, in fact only two of them per cylinder doesn’t sound like anything special.  But the thing about the Aermacchi road racers was, they worked.  Worked good.  The short-stroke motors could rev like an OHC motor, and the vertical single cylinder was situated to quickly ingest ridiculous amounts of fuel into the engine.  Lots of fuel + lots of revs =  lots of horsepower.

We made a bee-line back to the pits to get a closer look at the barking, red blur that had made all of the other much faster bikes on track seem fairly uninteresting.  What we found was a Tony Foale framed (https://motochassis.com/) Aermacchi 350 dripping with Italian goodness front to back.  You could drool over the Ceriani GP Forks, the Menani 4LS front brake, the vented rear brake, double-bubble fairing, the dry clutch, or even massive downdraught carburetor…it’s all gorgeous.  But it was the frame, the brazed, unpainted space frame that made this bike stand out as something special.  Owner and rider, Jim Connelly, confessed that he had almost painted the frame on many occasions, but decided to wipe it down with an oily rag each time-the raw metals and brazed joints just look too good to cover up.  Boy, do we agree.  Please enjoy the following pics of a truly stunning Aermacchi 350 road racer. 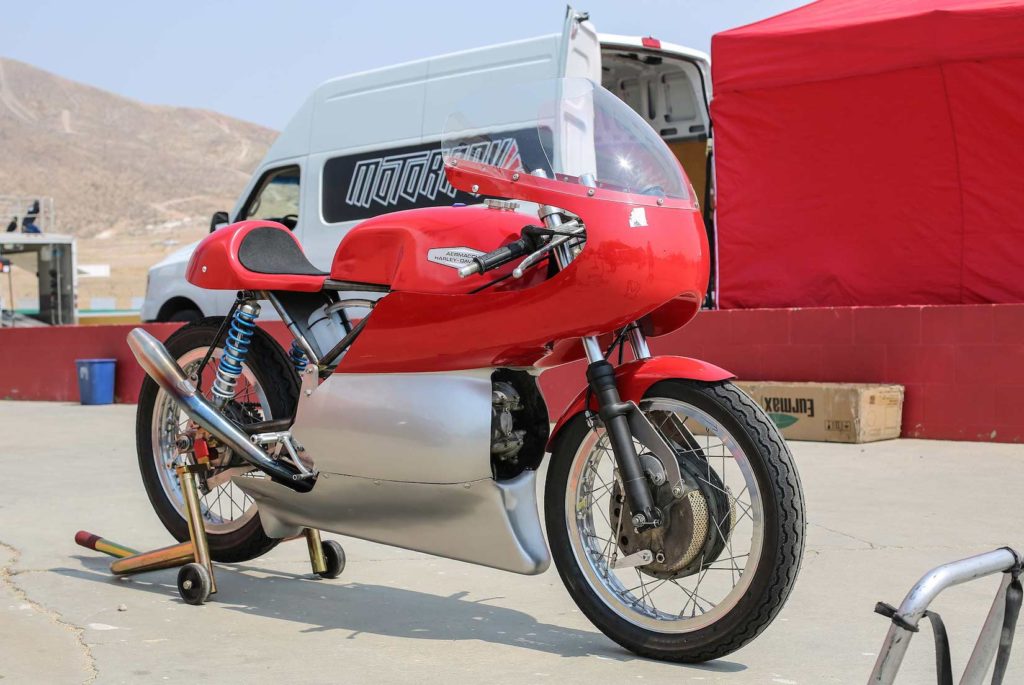 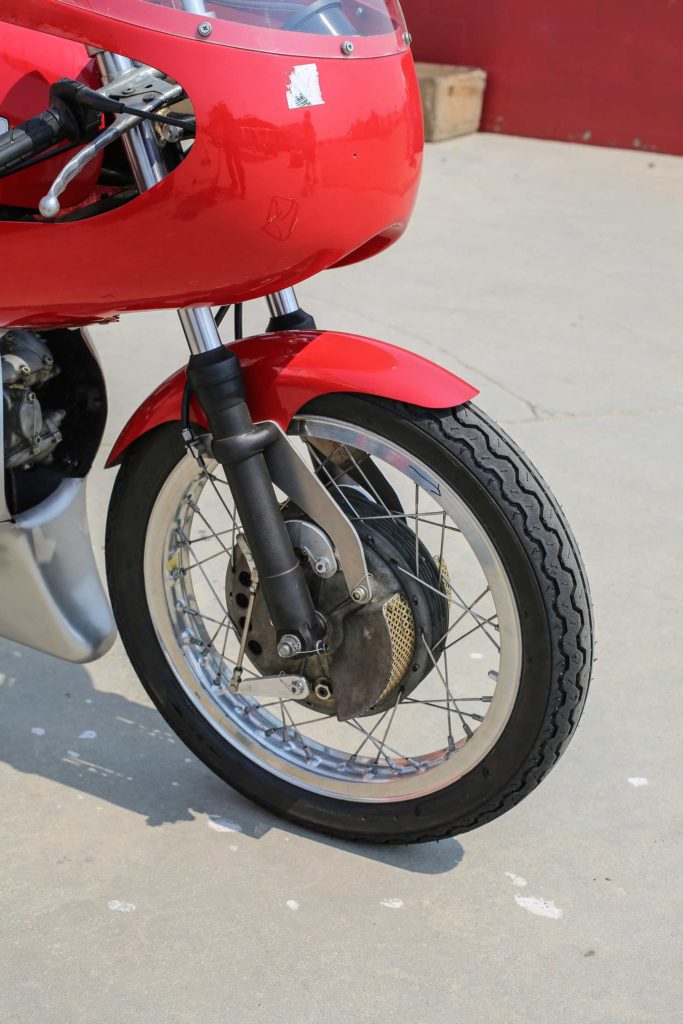 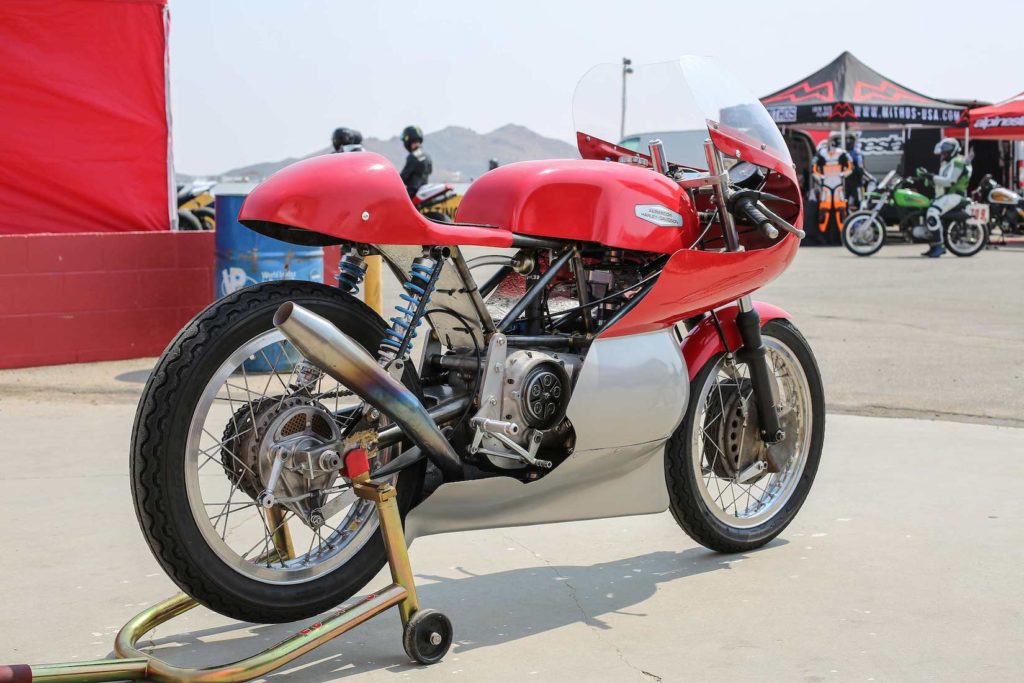 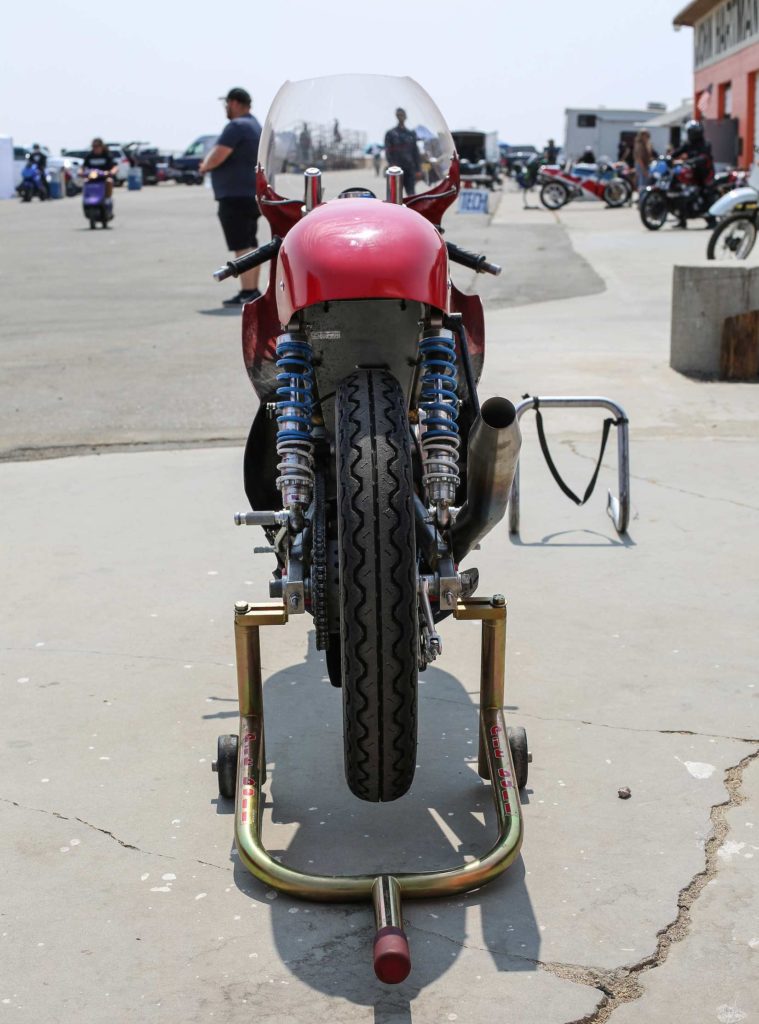 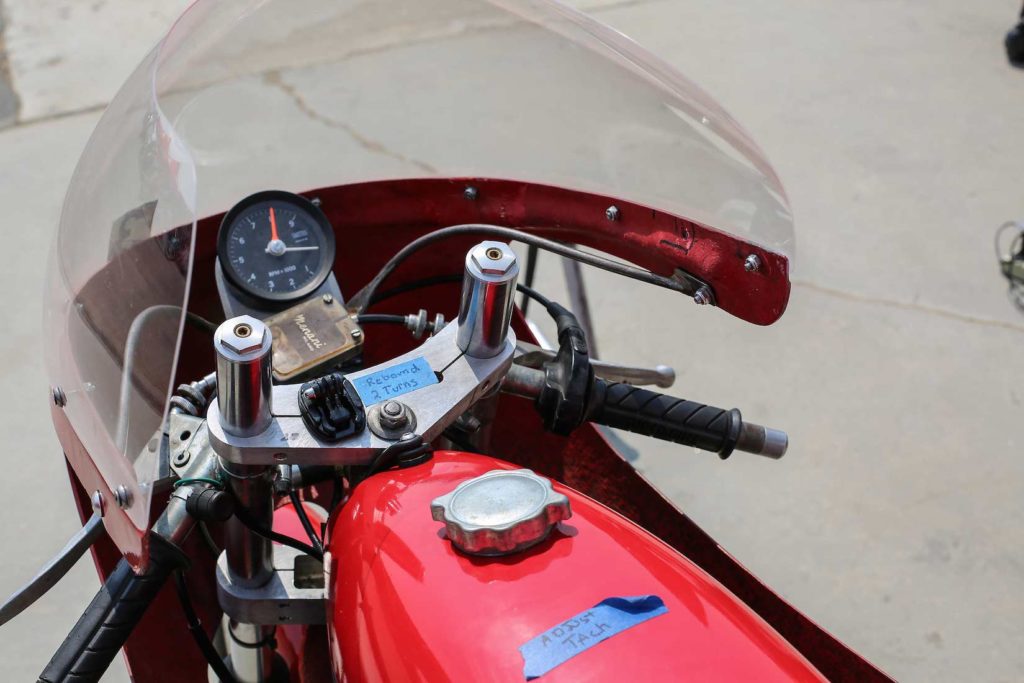 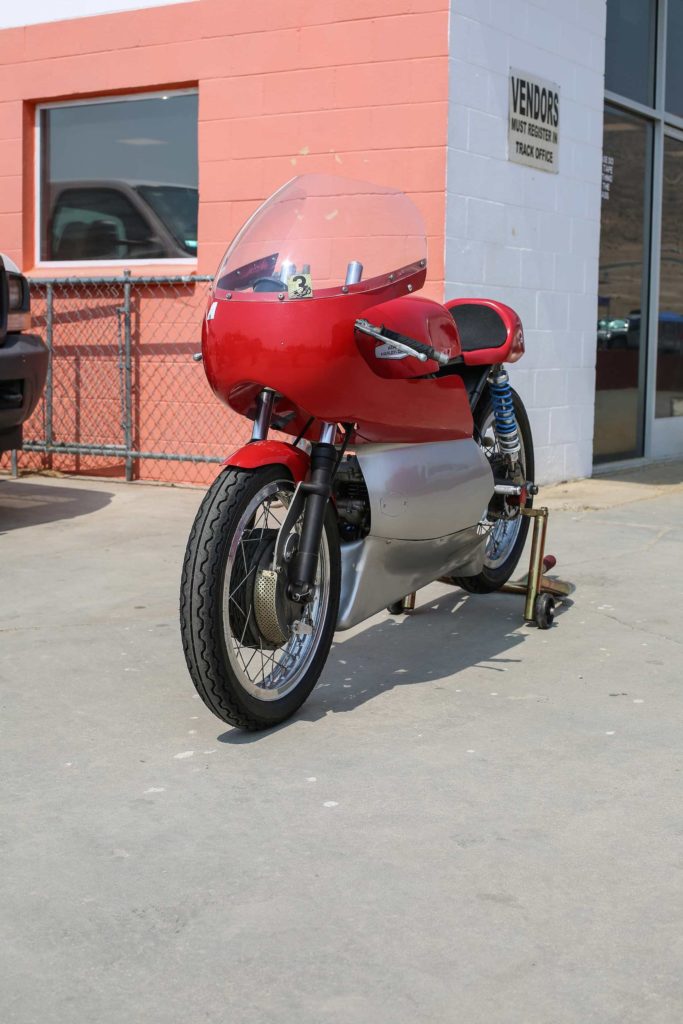 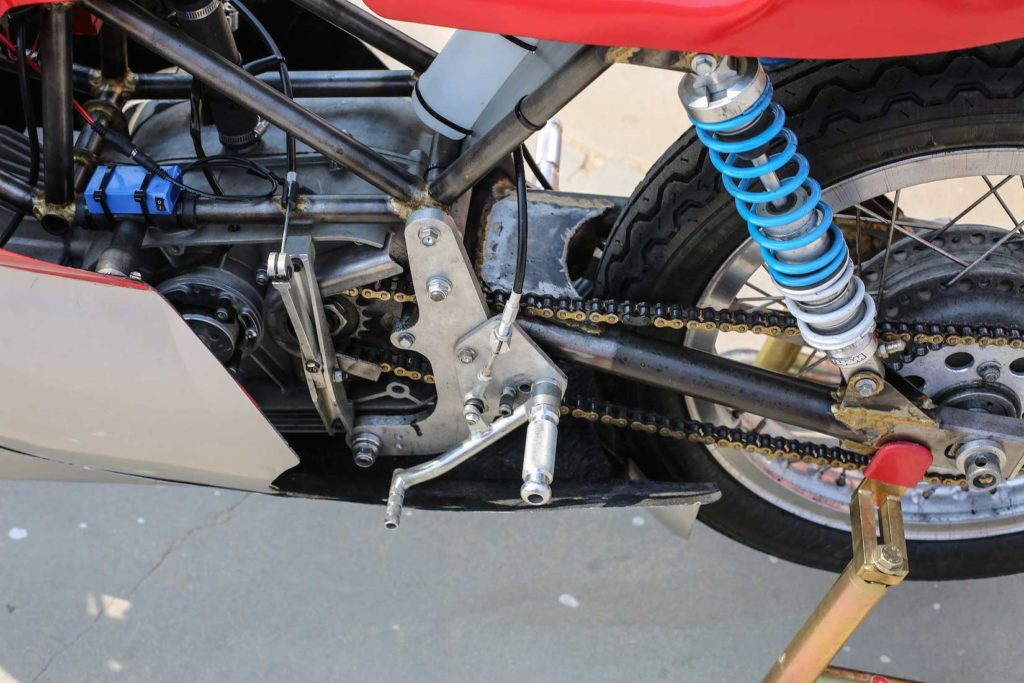 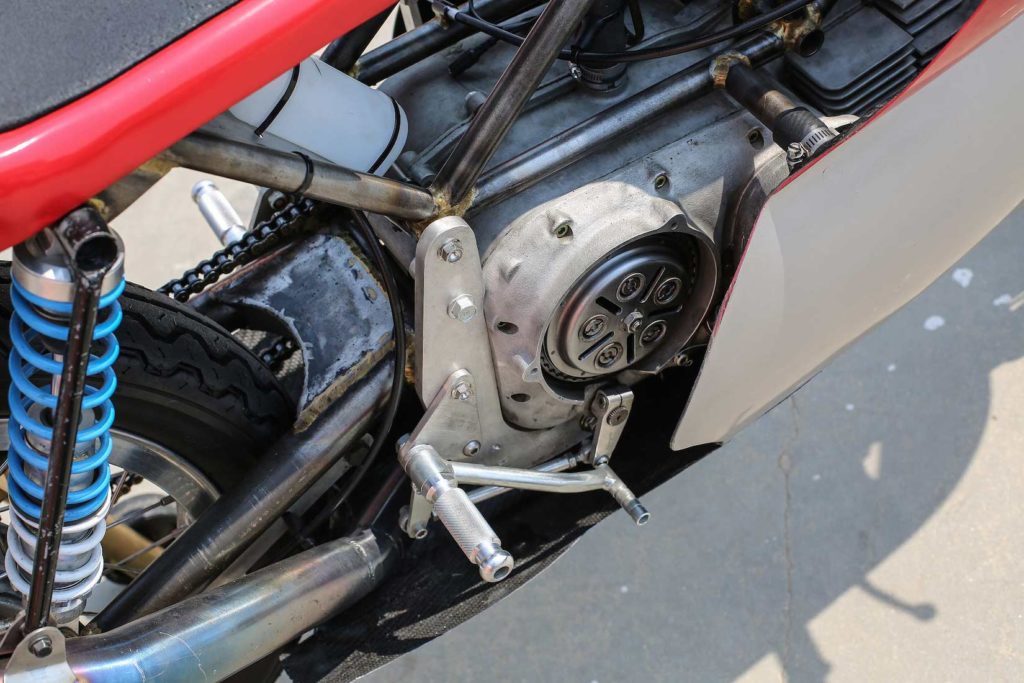