By 1968, the British motorcycle industry was clearly falling behind on the scoreboard.  The onslaught of finely engineered Japanese motorcycles was no longer a gimmick, but a thriving, and trusted source of superior two-wheeled machinery.  The incredibly sophisticated Honda CB450 “Black Bomber” of 1965 removed any thoughts that the Japanese could only build small, commuter bikes, and rumors of something even bigger and better from Honda was looming.  Enter the new Triumph/BSA Triple.  The new 750cc motor was essentially a Hail Marry of a bike, trying to get the ball into the in zone for a last ditch attempt at over time.  Unfortunately, the triples didn’t save the British motorcycle industry, but they did make the final quarter a bit more interesting. 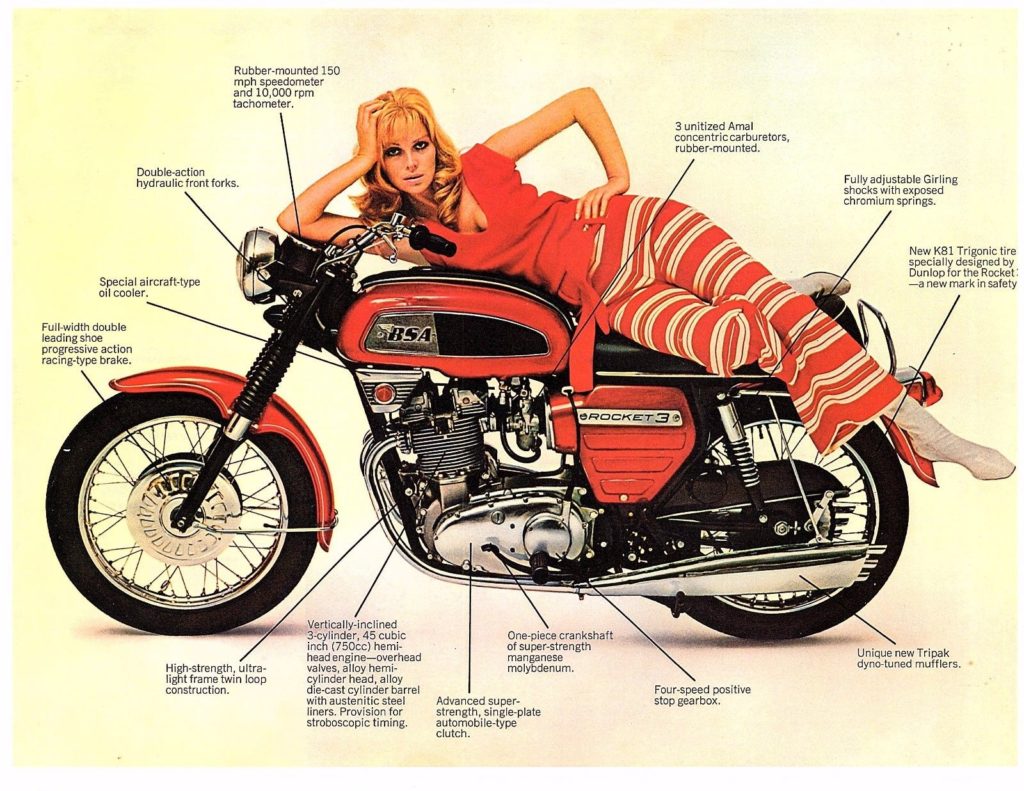 Sold from 1968-1975, the 58 hp BSA and Triumph Triples were a mix of sophistication and tradition.  The inline, over-head-valve, three-cylindered engine was designed specifically to take displacement beyond the architecturally limited parallel twins, and hit the new and crucial 750cc market.  The BSA version, dubbed the Rocket 3 differed from the Triumph Trident slightly, with all three cylinders inclined forward slightly (15 degrees).  In order to combat vibration, the crank pins were offset at 120 degrees, rather than the traditional 360 degree location.  The 120 degree crank smoothed out the three’s wriggles as planned, creating an engine that had the similar grunt of a twin, but the smoother revs or a four.  The clutch was unique, and comprised of one large, dry clutch disc, similar to a car clutch, between the chain case and primary.  Unfortunately, all of this unique sophistication was mated to a rather unsophisticated 4-speed gearbox and though over head cam, the pushrod operated valves sounded much more like the past than future.  However, co-designer, Doug Hele, claimed the early prototypes in 1966 could be pushed to 90hp-a shocking claim that if true would make it a full-blown “superbike.” 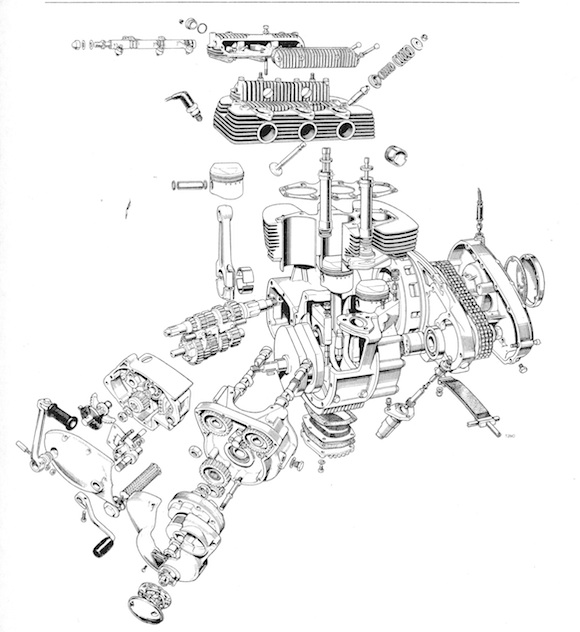 The BSA and Triumph differed yet again in chassis.  When debuted the Triumph was essentially a beefed up Bonneville, whereas the BSA used an A65 derived duel down-tube frame.  Drum brakes front and rear were far from impressive, along with the rudimentary suspension which was simply the status quo for British bikes.  Though the bikes were originally styled by Triumph and BSA, they were both eventually re-designed by the Ogle design group, and arrived in showrooms in the summer of 1968 with a boxy, untraditional vibe, that gained as much criticism as it did praise.  Four weeks later the disc-braked Honda CB750 with it’s overhead cam, electric start, four-cylinder, five speed, horizontally split, oil-tight cased precision mill hit the sales floor.  Shrug.  But, it wasn’t over yet.  Though the new Honda was technically far, far superior, and buried the triples in sales, the quirky, but fast British triple was able to hold it’s own and was widely praised as a very good motorcycle. 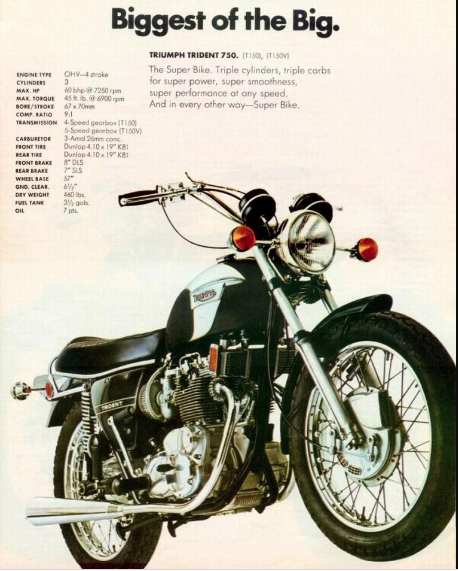 Honestly, if it wasn’t for the Honda CB750, the British triples would have likely been a massive success.  But, “what if’s” don’t count when you are an ailing motorcycle manufacturer.  BSA was out of business by 1972 and Triumph incredibly limped on into the early 1980’s, finally going into receivership in 1983.

With a someone mediocre back story, the question arises: why are these bikes iconic?  In our opinion, this may have more to do with race track wins than salesroom success.  This would probably be a good time to mention a gentleman named, Rob North. Rob was known as a master fabricator in the late 1960s.  After successfully building a Triumph 650 road race frame for Percy Tate to beat Agostini on 1967, Rob was definitely on the radar as an up and coming frame builder.  In late 1969, the BSA Triumph group decided to take the new triples F750 racing to help bolster sales.  As the story goes, designer Doug Hele himself drew up plans for a special racing frame and well known frame builders, Reynolds, were approached to construct the frames.  A backlog of commitments at Reynolds meant the frames wouldn’t even be jigged up for months.  This is where Rob’s connections came into play and Hele’s good friend recommended Rob to build the frames.  Who was this friend? Percy Tate, of course. 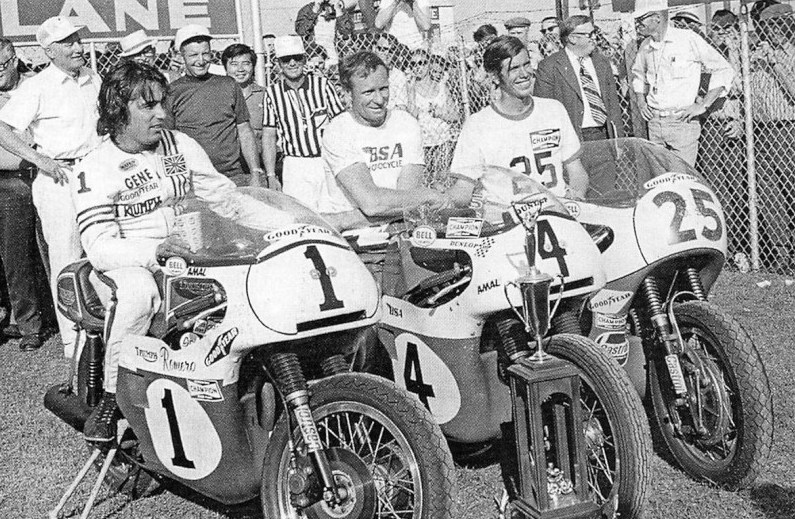 Rob made a few tweaks to the Hele designs and made up 8 in the original batch.  These proved quite successful, but Rob saw room for improvement and built a second batch for the 1971 season.  These had a slightly lower head stock than originally penned, thus the nickname- the “Lowboy.”  It is the Lowboy Rob North Triples that took the world by storm.  The solid handling frame, now with a lower center of gravity, paired with the smoothly revving triple and large Lockheed disc brakes front and rear were the basis of a legendary, dare we say, iconic motorcycle. 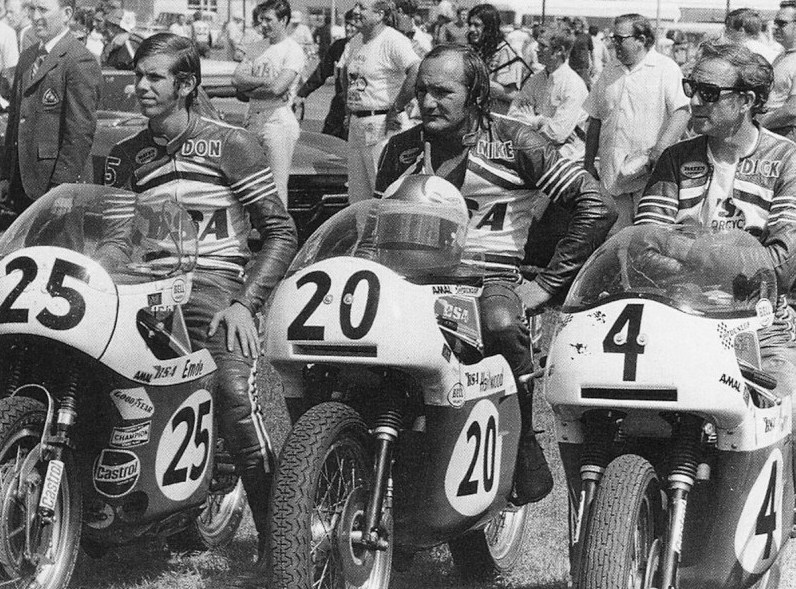 The Rob North triples, sometimes referred to as the “Beezumph” racers (get it? It’s BSA combined with Triumph) finished second and third at Daytona in 1970, and took all three podium spots in 1971 when Dick Mann won the race, followed by Gene Romero on another Lowboy, and Don Emde last year’s drum braked “Highboy.”  The Rob North framed Triples also took wins at the Bol d’Or and F750 TT races and dozens of regional races across Europe and the USA.  It was unexpected and it was incredible.  It was storybook level accomplishments from a pair of manufacturers that were just trying to keep the lights on.

Pictured below is what could quite possibly be the very same bike Dick Mann crossed the finish line victoriously at the Daytona 200 in 1971.  Why “quite possibly?”  Well, because there are two factory BSA Lowboy Triples that currently exist, and both owners are making the exact same claim.  In all honestly they both could be right in a way.  Common practice at the time meant that engines and frames were swapped as needed, so it’s quite difficult to say if a bike you have now was the same bike as raced in 1971.  Regardless, we were blown away by this factory BSA Lowboy triple as we perused the pits at Willow Springs Raceway a few years ago.  Is it the exact bike that won Daytona?  Probably….maybe?  Regardless, it’s an amazing piece of history and recounts a fantastic era in British motorcycling. 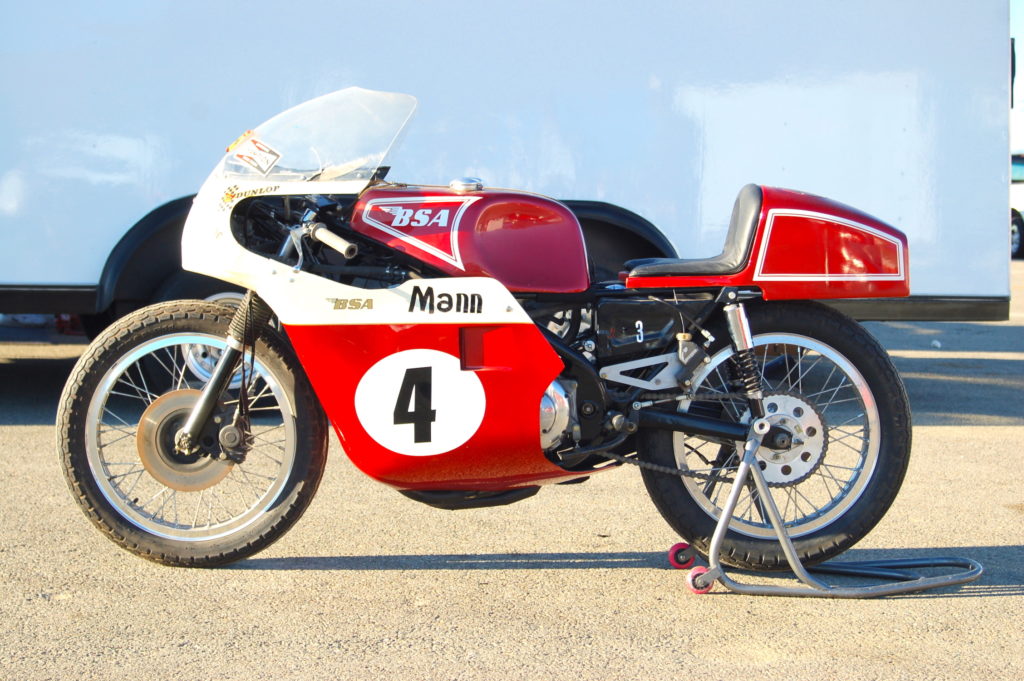 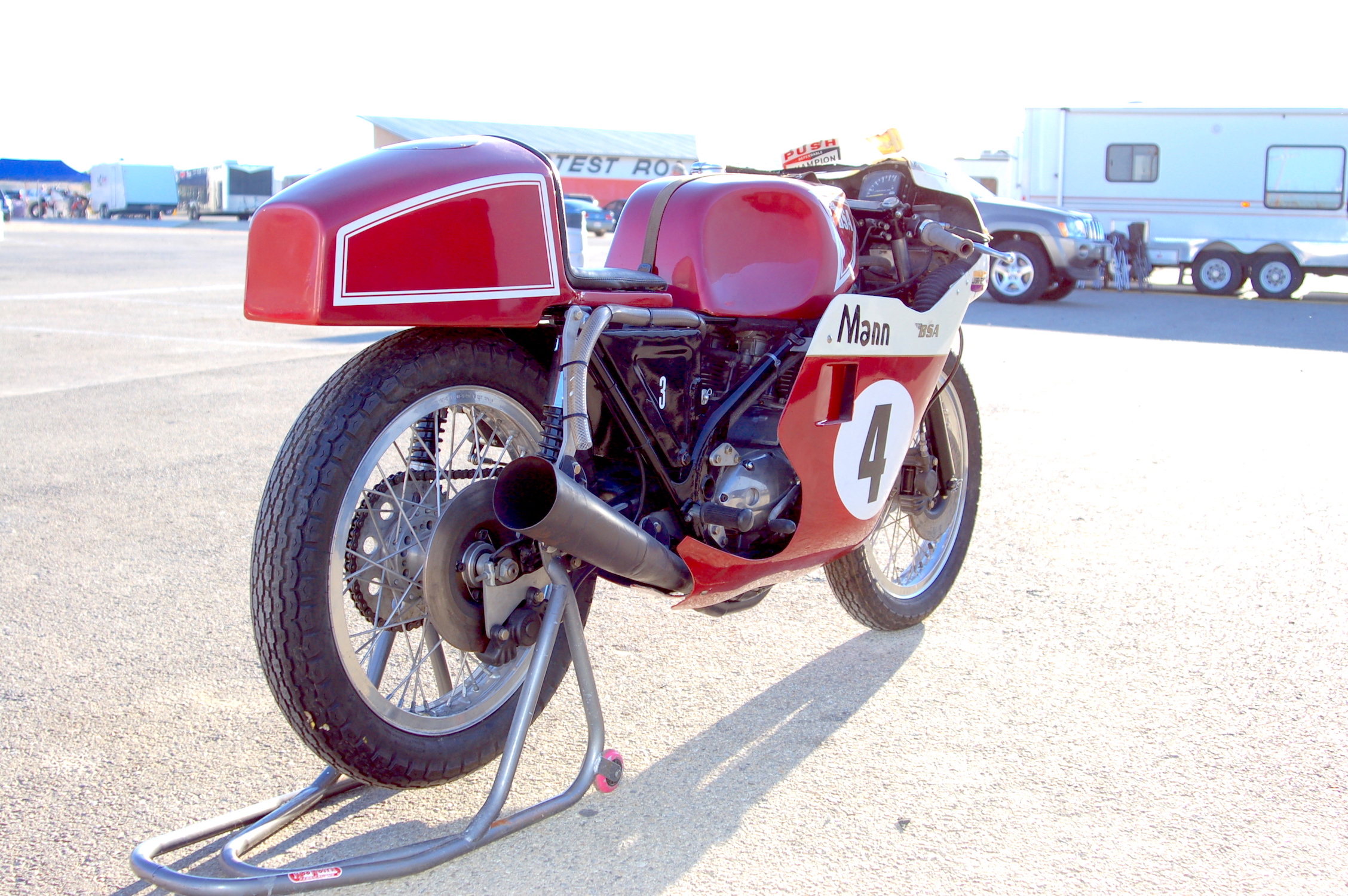 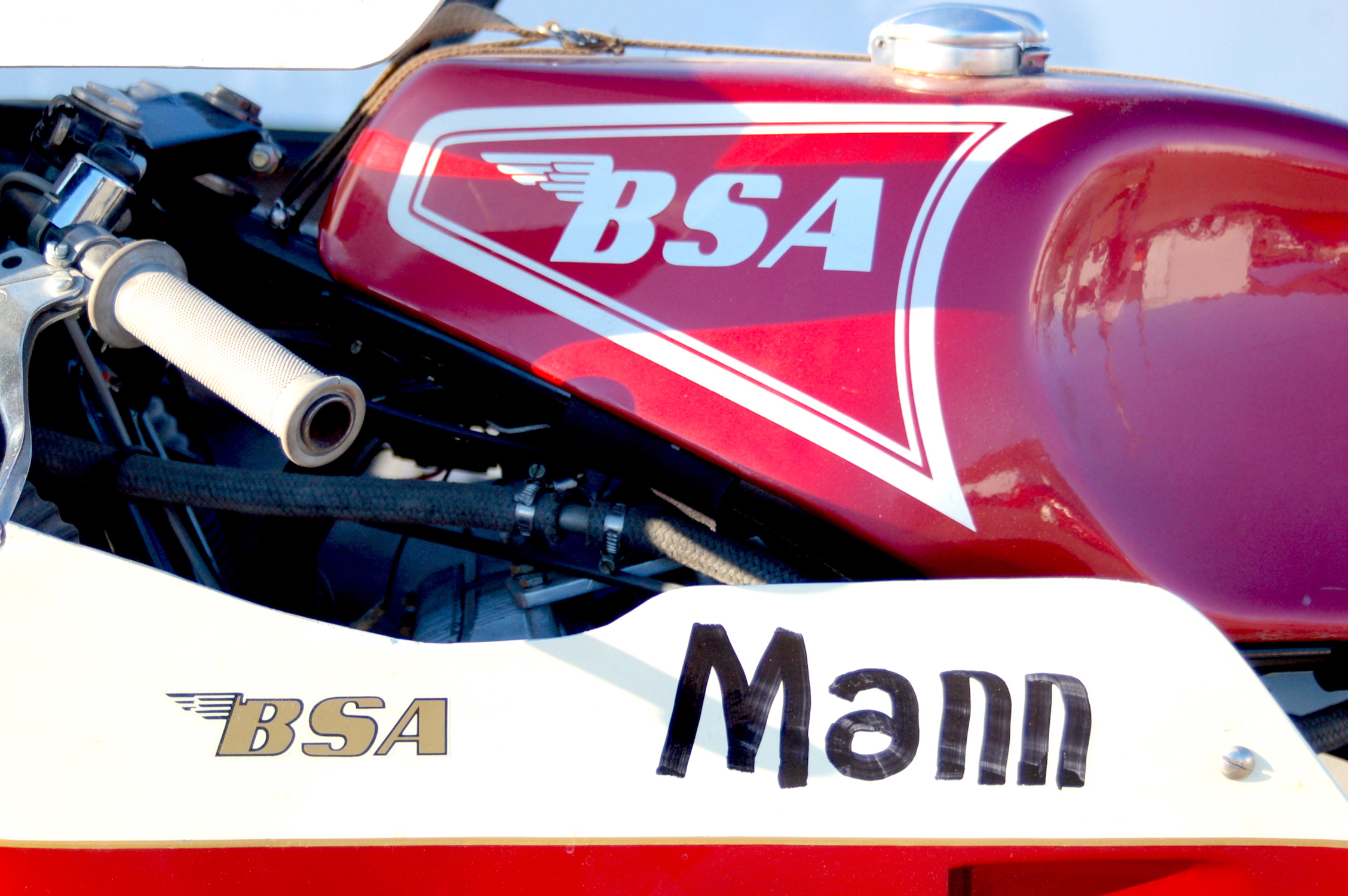 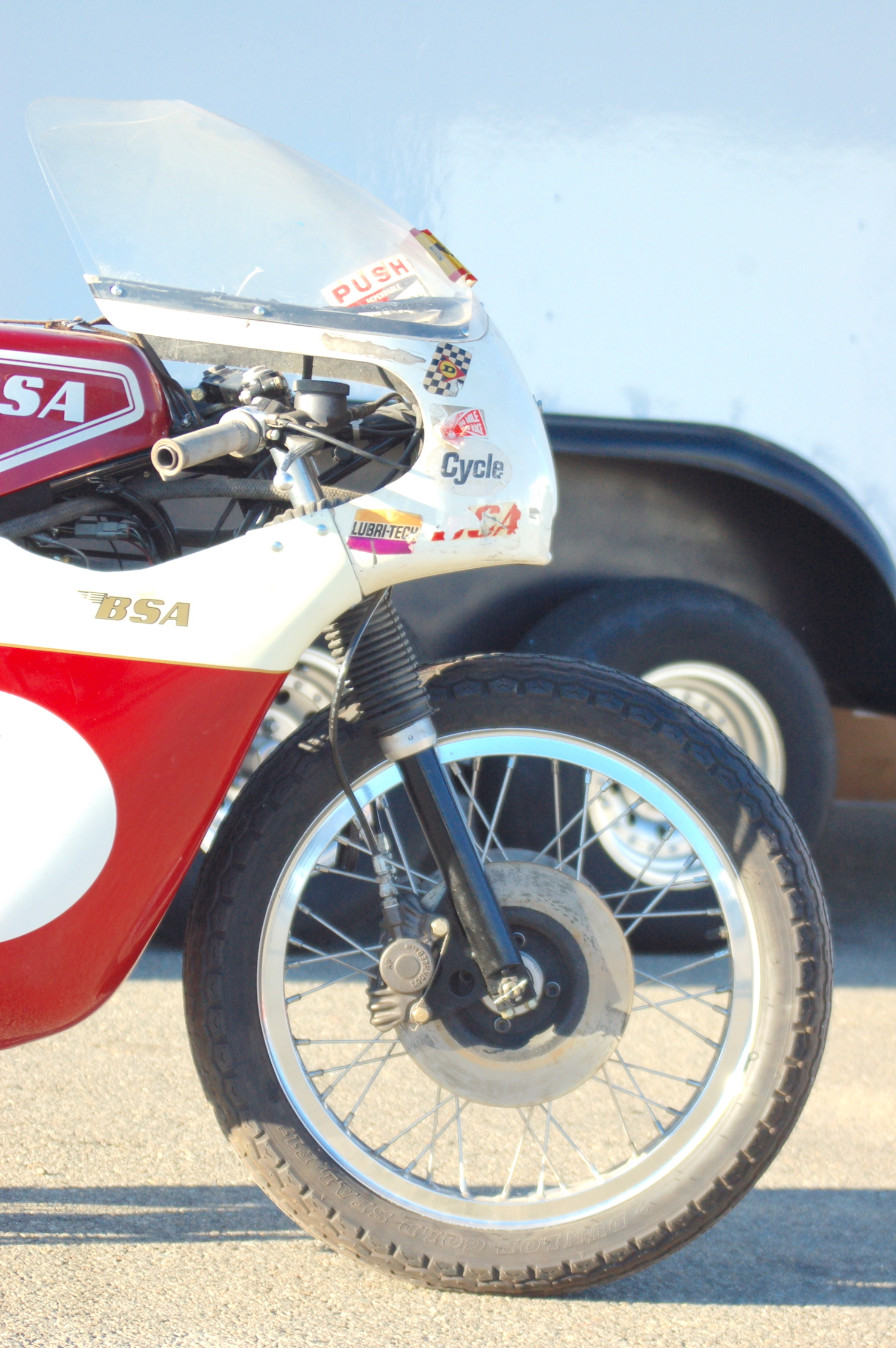 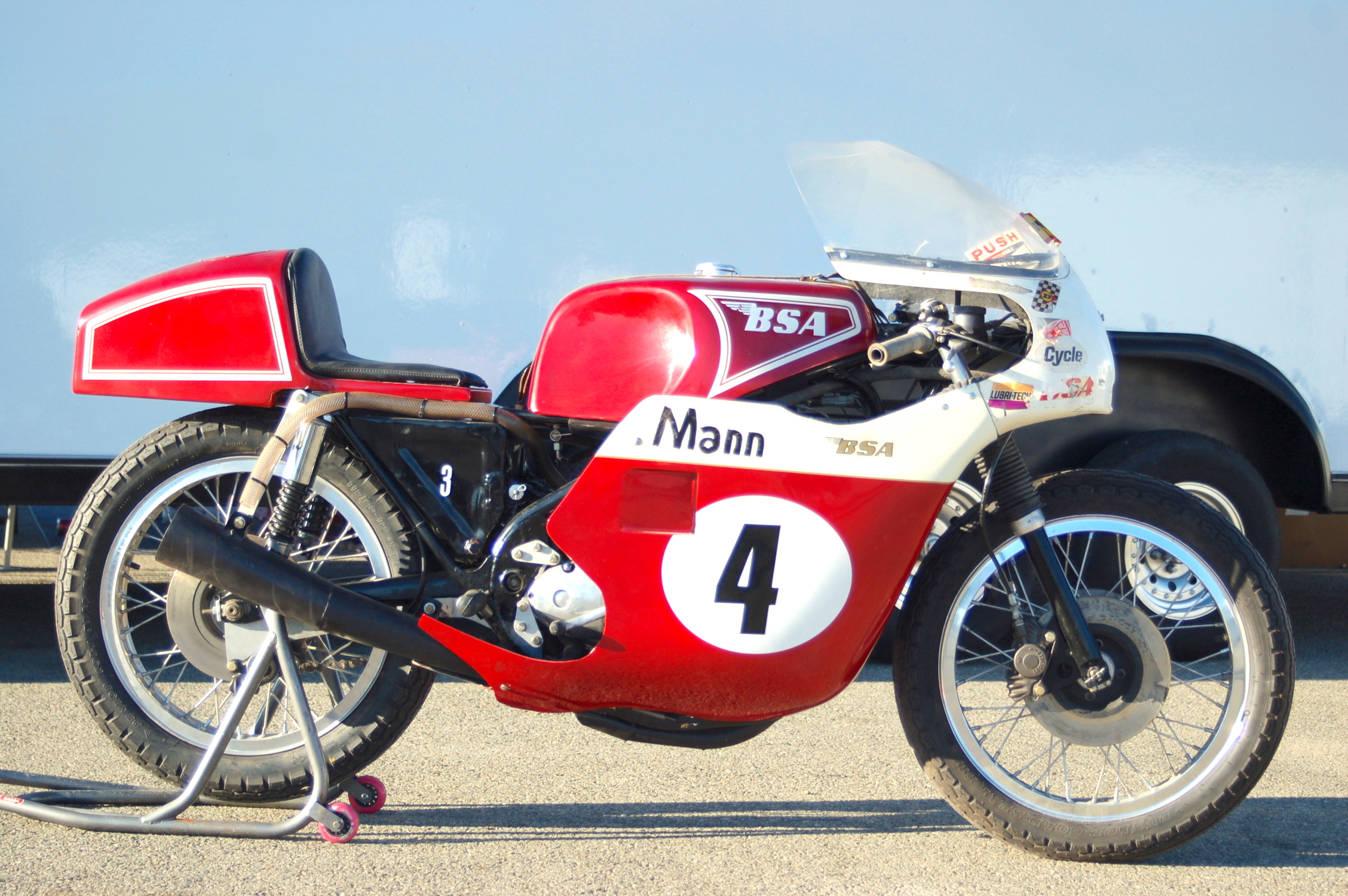 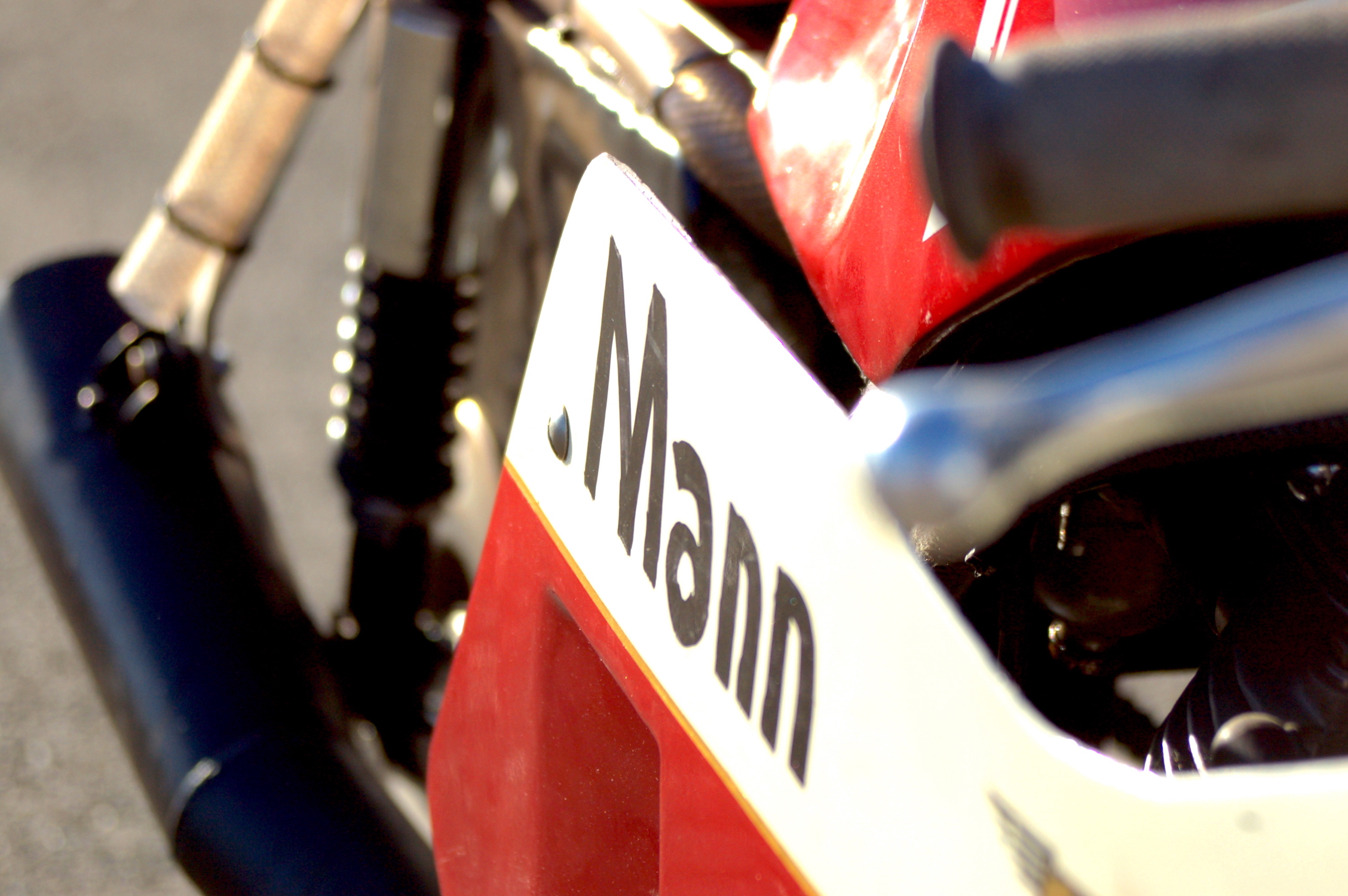