Warning:  Modern Content.  If you are a vintage purist, let’s pretend this didn’t happen.  Cool?

When Ducati first teased the release of the Scrambler Cafe Racer in early 2017, I have to admit I thought I was reading some kind of typo.  In fact, the word “oxymoron” came to mind.  But, alas, the bike hit the sales floor and looked pretty darn good.  The rounded Scrambler tank had a nice shape against the racer style seat and lower bars- I’m sure the Thruxton design team over at Triumph were rolling their eyes.  With 17 inch wheels front and back, a little wind screen, and the classic, air-cooled Ducati 800cc twin rumbling beneath you, Scrambler Cafe Racer did pull off it’s contradictory namesake just fine.

For 2019, the Scrambler Cafe racer does have a few slight updates such as an improved head light, ABS system, spoked wheels, and a lighter-pull hydraulic clutch (see the press release below for more details).  The other update for 2019, is something known in the motorcycle industry as “Bold New Graphics,” or  BNG.  For years, BNG has been a bit of a joke among moto-journalists, looked at as a manufacturers ploy of making the uneducated consumer think next years model had major updates, when in fact it’s just the same old bike with different paint, and a few more stickers.  This perhaps is the first time I have seen BNG actually make me more interested in a bike.  This BNG is a complete cosmetic re-style, but this time in a nod to the 1950’s 125cc Grand Prix racer finished in the same silver and blue color scheme.  The number 54 on the each side, a homage to Ducati factory racer Bruno Spiaggiari.  It seems that Ducati decided to double down on the Scrambler Cafe Racer, and make this retro bike even more retro-and honestly, I love it. 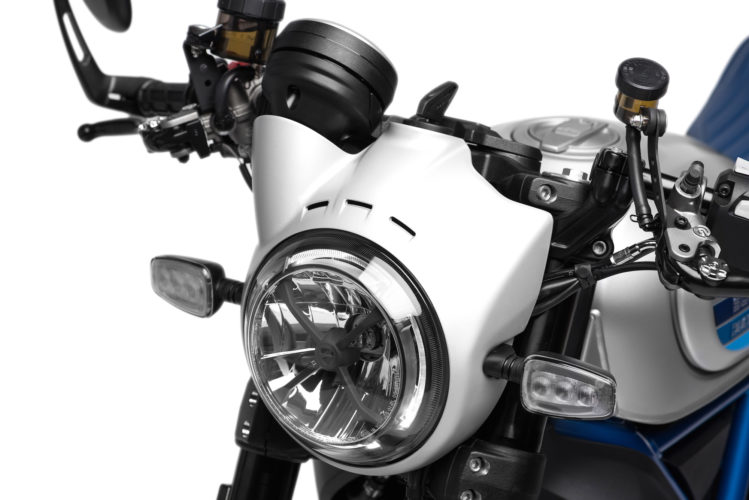 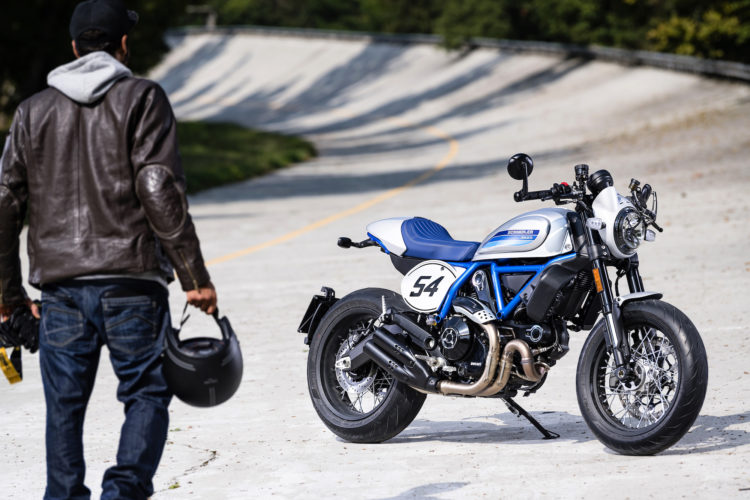 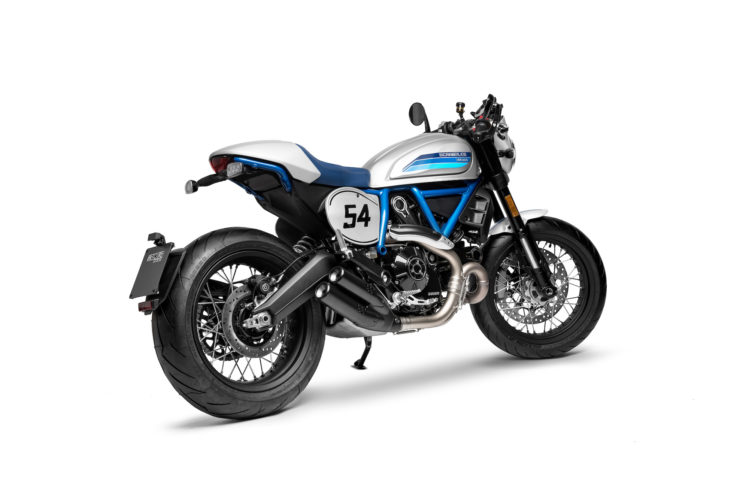 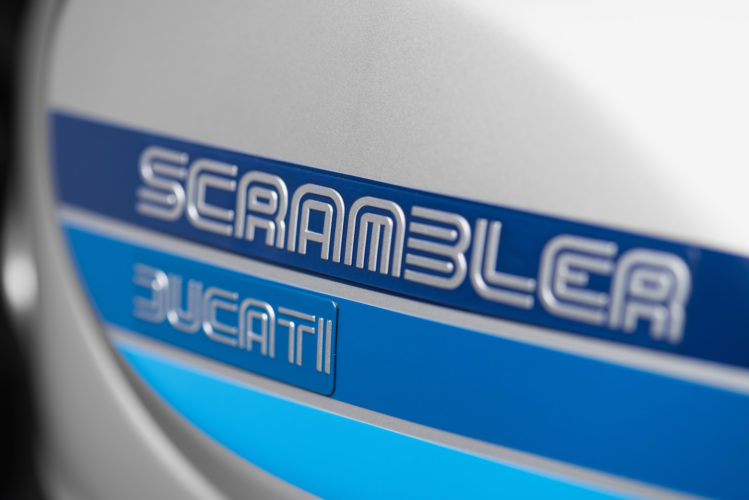 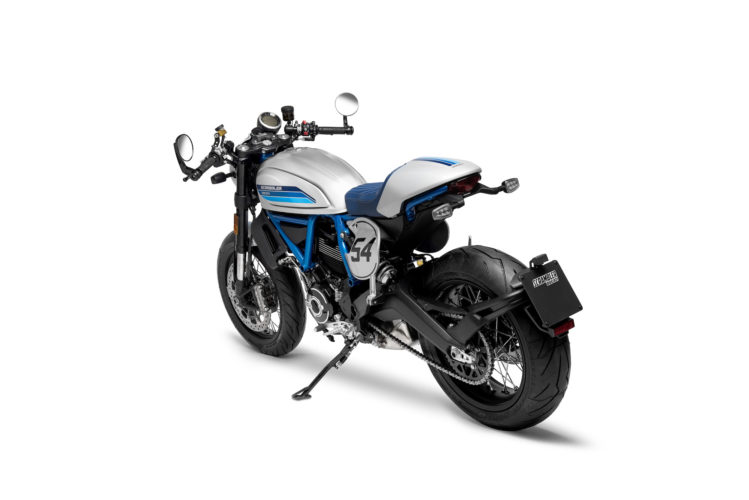 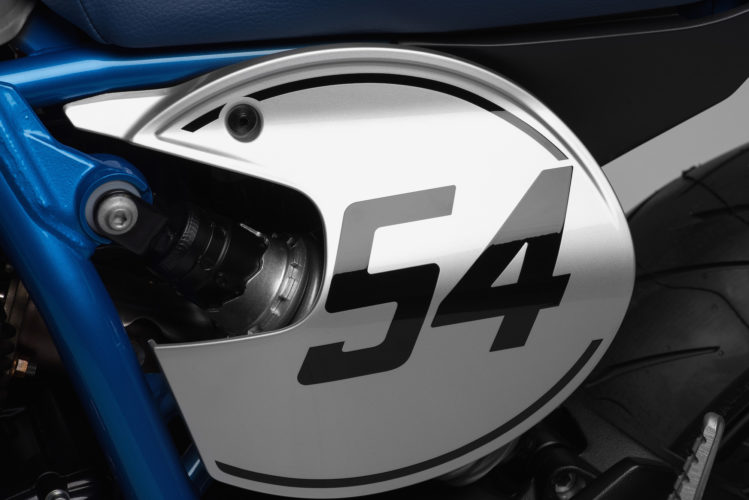 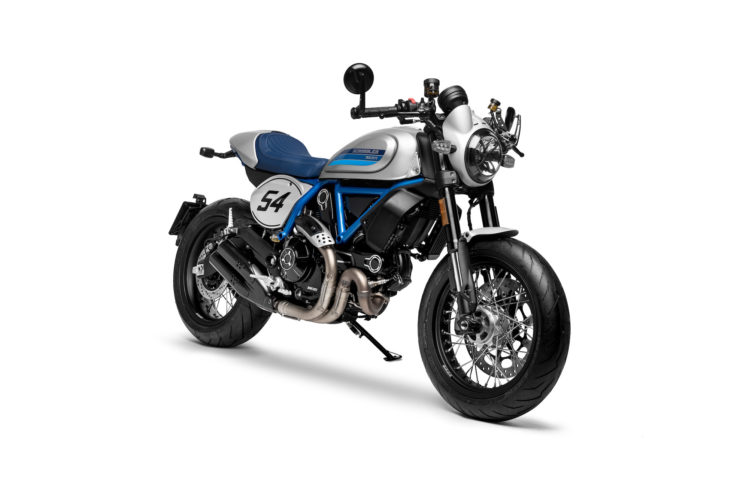 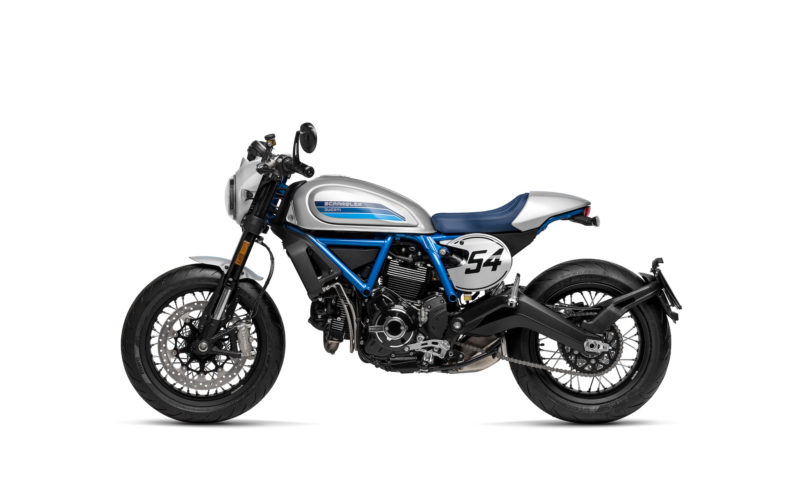 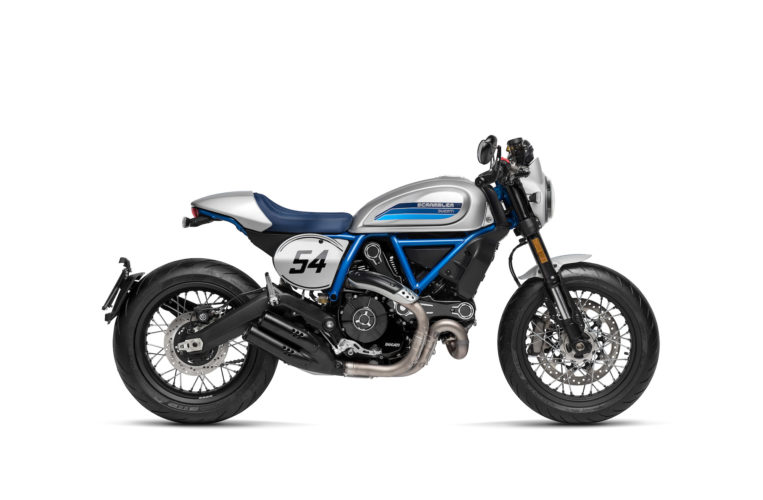 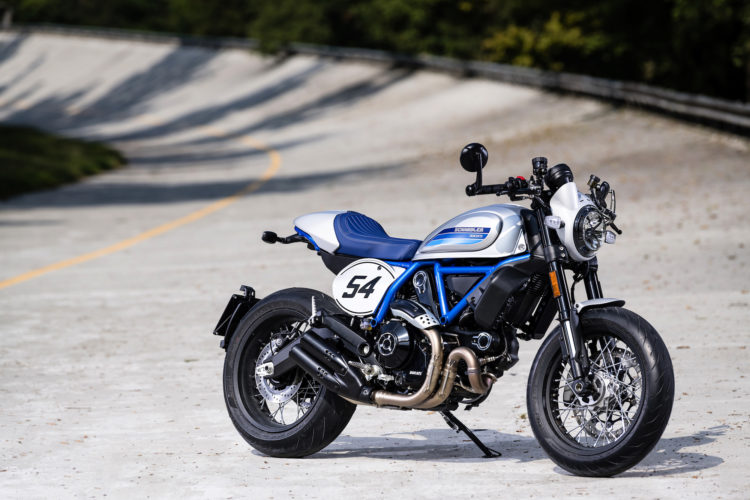 Cologne, Germany, 2 October 2018 – The Ducati Scrambler Joyvolution continues and the Land of Joy fun settings have been ramped up with the arrival of three fresh versions. Right now, the new Full Throttle, Café Racer and Desert Sled are gearing up to take center-stage at INTERMOT 2018 (International Motorcycle, Scooter and E-Bike Fair), to be held in Cologne from 3 to 7 October. The new Full Throttle takes its cue from the flat track Scrambler ridden by Californian racer Frankie Garcia in the 2018 American Super Hooligan Championship. With its two-tone black-yellow white-striped tank, all-new rear end with dedicated seat and white-rimmed yellow number holders, this bike has a real dirt track competition feel. A low-slung tapered handlebar – light and ergonomic – stubby front mudguard and dual-silencer exhaust add to the distinctiveness of the Scrambler Full Throttle. With its renewed livery, the Café Racer draws its inspiration – and Silver Ice Matte graphics with blue frame – from the legendary Ducati 125GP Desmo. The new 17″ spoked wheels and aluminium bar-end mirrors give the bike a cool ’60s race look, while a modern radial front brake pump provides braking performance on a par with that of a sport bike. And there’s more: the exhaust with dual tailpipe, nose fairing, lateral number holders (with the number 54 in honor of Bruno Spiaggiari) and stubby mudguard are all clear references to the bikes that roared down British streets in the ’60s.The Ducati Scrambler Desert Sled rekindles the spirit of classic American off-road bikes without compromising on Ducati Scrambler lifestyle values. With its red frame, new seat with color-coordinated stitching and spoked wheels with black rims, this bike is more up-to-the-minute than ever. The new Desert Sled also features an Off Road Riding Mode that allows ABS disengagement for down-in-the-dirt fun. A dedicated riding position and adjustable Kayaba suspension also ramp up the fun factor. Rugged off-road character also oozes from the type-approved headlight mesh guard, high mudguards (specially designed for this version) and engine skid pan. These latest versions take self-expression to the max. And they stand alongside the new Scrambler Icon from which they inherit new aesthetics and technical features: presented to the press in mid-September, the latter will get its world-first public preview at INTERMOT 2018. The aluminium of the new, beefier side panels matches the steel of the teardrop tank and the glass of the headlight flawlessly. A black-painted engine and brushed cylinder head fins add even more eye-catching panache to these new versions. The all-new headlight with LED DRL (Daytime Running Light) boosts bike visibility in traffic, even in daylight, as do the new auto-off LED indicators. More ergonomic switchgears simplify scrolling of the LCD menu, which now shows selected gear and fuel level info. They also allow smooth operation of the Ducati Multimedia System, which lets riders listen to playlists, answer incoming calls or chat with the passenger on the intercom. Moreover, thanks to the safety provided by Bosch Cornering ABS – all-new and exclusive for this category of vehicle – riding is now more carefree than ever. Riders will also appreciate the new softer-feel hydraulic clutch control, while the adjustable lever – like the one on the front brake – ensures the lever-handlebar gap can be adapted to individual needs. Just four years after the Scrambler Ducati brand official launch – in Cologne itself back in 2014 – over 55,000 bikes have been sold worldwide. The breadth of the brand is also evident in the four Ducati Scrambler Camp stores in Borgo Panigale, Padua, Barcelona and New York, plus the two Scrambler Food Factory restaurants opened in Bologna. To see the official launch video for these versions check out the Ducati Scrambler social networks or go to the official website and share the content through #joyvolution and #scramblerducati. All Model Year 2019 Scramblers will be available in North America in Q1 2019.U.S. Starting Price (MSRP)Scrambler Icon: $9,395Scrambler Full Throttle: $10,995Scrambler Desert Sled: $11,995Scrambler Café Racer: $11,995